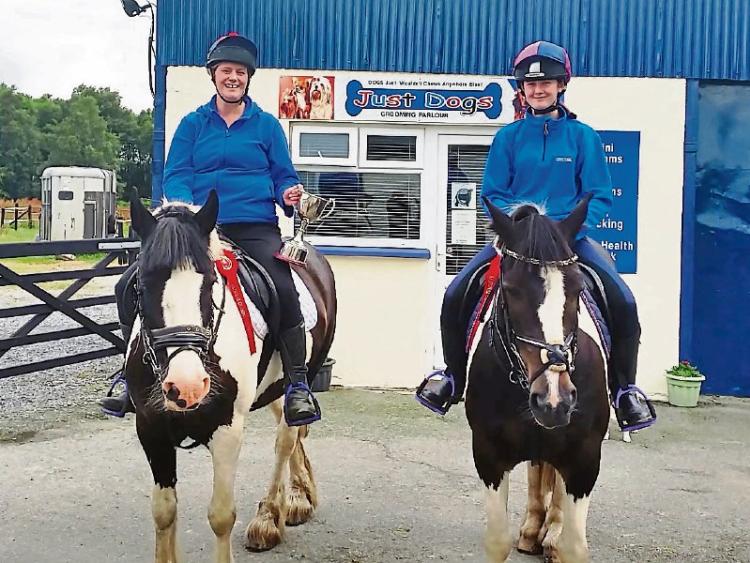 Liz Burbage and her daughter Vicky McMullan from Treascon led their horses through complex trekking and skills events in the three day TREC Ireland National Championships in Bantry.

They won first prize in the Pairs event and Liz also won Best Coloured horse and the Level 2 Grangeclare Cup.

Liz, a native of England, is now thrilled she will be “flying the Irish flag” at the TREC GB National SEIB Championships in Suffolk this coming weekend.

“We will be representing TREC Ireland and Leinster TREC.

“It is an honour, we are really proud to be doing it, we will be decorating our lorry with Irish flags, and hopefully we will win,” she said.

Horseriding is a lifelong passion for both mother and daughter.

While it is a serious hobby for dog groomer Liz, with a stable and arena installed at home, Vicky, 17, intends to make it a career.

She awaits her Leaving Cert results from Coláiste Iosagáin, but has been accepted to Kildalton College in Kilkenny for Equine Studies.

“Vicky has competed in the All Ireland hunt trials too, and also does show jumping. She has come on in leaps and bounds.

She wants to aim for the European Young Rider Championship,” said Liz.

They joined TREC two years ago, Vicky on gelding Garnagree Duke, and Liz on her mare General’s Daughter, both black and white cobs.

“TREC originated in France and is basically orienteering on horseback.

“My mare took to it like a duck to water. You are shown a map to trace and then timed on your horses over the route, going at a set speed of 8kph,” she said.

“It is a fabulous sport to get involved in.

“You can go all over Ireland to events, you see so much scenery you don’t normally see,” Liz said.