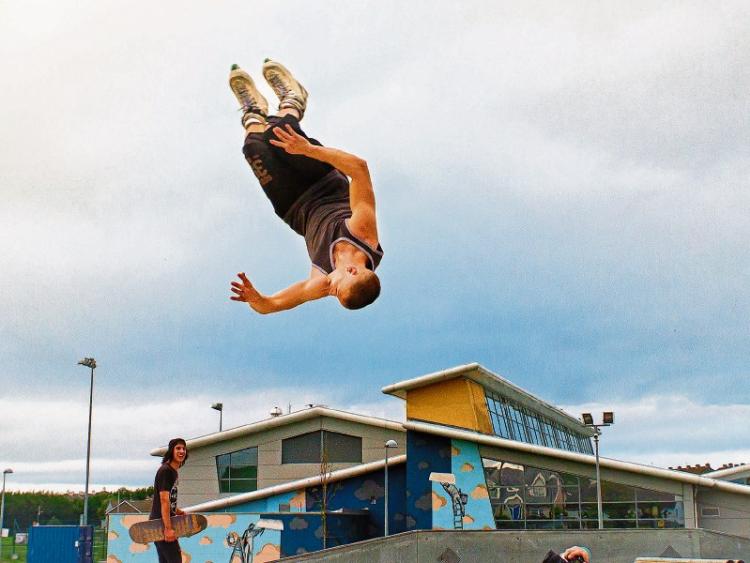 The recently completed skatepark at Portlaoise Leisure Centre is boosting skills of skaters near and far in leaps and bounds.

The park will officially open at the end of September, but already is a hive of activitiy.

Chris Craig is one of the Portlaoise skaters who campaigned for it for eight years.

He is happy at the result.

“There are more people skating in Portlaoise now than we’ve ever seen. People are even coming from Tullamore and Portarlington,” he said.

The wooden and concrete ramps allow for plenty of slick front and back flips and aerial acrobatics, and not just for skateboarders, but roller bladers and BMX bikers too.

“It will improve our skills by miles, people are already starting to get better,” Chris said.

It has been a long campaign, starting when the first park closed in 2007 after just two years, and the €60,000 of ramps was put into storage by Laois County Council.

“I think in the last two years they properly started listening to us, I suppose as we got older we were taken more seriously,” Chris said.

He credits Portlaoise Cllr Noel Touhy for helping to bring about the park, installed by the council.

“Noel was brilliant, we couldn’t have done this without him,” he sald, also crediting fellow skater Craig O’Hara, who kept “drilling in” the need for a park, including starting a petition that got more than 1200 signatures.

Chris asks parents to ensure children under 10 are supervised, and that all users are “padded head to toe” with helmets. Mountain bikes and flickers are not permitted.

“If people get injured it’s not the fault of the skatepark,” he said.

The skaters will hold a skills competition timed with the official opening in late September, with prizes of equipment and skateboards.