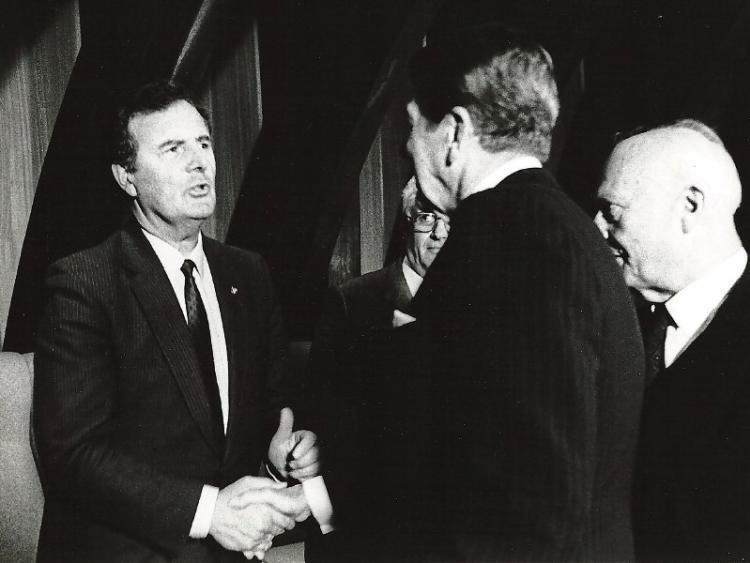 Paddy Lalor's political career spanned a large swathe of the latter decades of the 20th century.

His earlier successes on the sports fields paved the way for a political career that took him from Dublin to Europe.

Born in July 1926, he was educated in Knockbeg.

He distinguished himself in sports early on, playing for Laois county teams in both codes.

He was famously a member of the Laois All-Ireland hurling team of 1949 (there is only one surviving member of that team left).

He was also Captain of the Leinster team in the Railway Cup Final of 1949.

He was first elected to Dail Eireann in 1961, and was subsequently elected in every election up to 1981, when he did not stand because he had been elected to the European Parliament in 1979.

Following the 1965 election Sean Lemass appointed him as Parliamentary Secretary in the new Dail, with the Fisheries portfolio.

Upon the election of Jack Lynch as leader, he was moved to Posts and Telegraphs as Parliamentary Secretary.

Following the 1969 general election, Lynch appointed him as Minister for Posts and Telegraphs.

He supported Lynch during the upheaveal of the Arms Crisis and in the shake up that followed was appointed Minister for Industry and Commerce.

During the period when Fianna Fail were out of office from 1973 to '77 he was party chief whip.

He was held in that position following the Fianna Fail landslide in the election of 1977.

With the first direct elections for the European Parliament due in 1979, he decided that his future might lie in Europe and he contested them.

He was duly elected to the European Parliament in 1979.

His time in Strasbourg saw him saw him serving a term as Vice-President of the European Parliament.

He was last elected to the European Parliament in 1989, and that was his last electoral foray.

He was predeceased by his wife Myra, two and a half years ago.

Reposing was at his residence at Main Street, Abbeyleix on Sunday with removal to the Church of the Most Holy Rosary on Sunday evening.