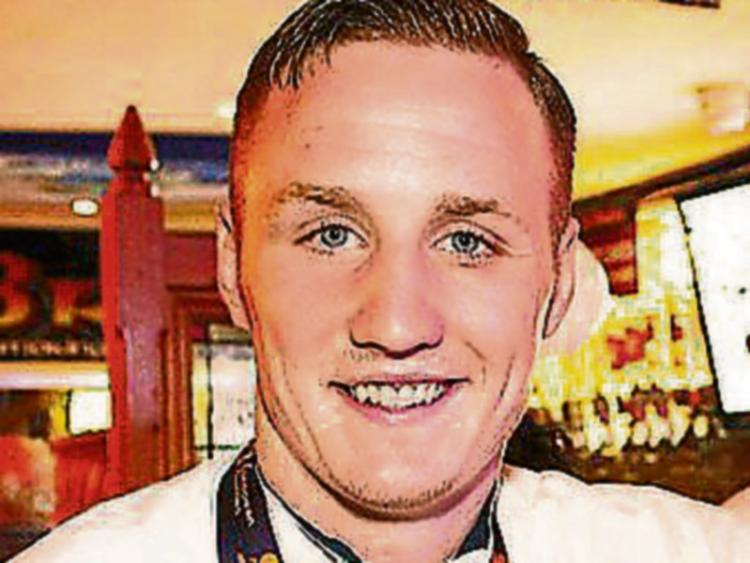 European Olympic Games in June of this year, an accomplishment which secured him a coveted spot in the World Boxing Championships in Doha, Qatar in October 2015.

Should 22- year old Michael finish in the top three in Qatar, he will compete at the Olympics in Rio de Janeiro next summer.

“The Olympics has always been my dream and I can’t believe how close it is to actually happening”.

It seems fitting that Michael should utter these words in his “second home” Portlaoise Boxing Club, the 4,000 sq metre complex in Kea Lew business park. Pictures of former champions like Joe Kerry and photos of the 104 national title holders thus far are scattered throughout the training hall which have served to inspire Michael throughout his career. Founder Billy Blackwell frames the wall beside the clubs main entrance and to Blackwell’s left beams the face of Michael O’ Reilly holding his precious gold medal from the European Olympic Games.

Michael started his boxing career at the tender age of nine in Portlaoise Boxing Club.

He joined at a time when there were numerous national champions in the club.

From a very young age he learnt the rudiments of the skills of boxing, how to move with his feet in all directions, developing the special offensive, defensive skills and ferocity for which he is renowned.

For anyone thinking his achievements are an overnight success, Michael has won national titles in every category possible; school boy, juvenile, youth, junior, intermediate, u-21’s and senior levels. To what does this proud Portlaoise man attribute his success?

“I suppose I’m a big believer in my own ability. I know what needs to be done and I train hard to achieve it. I’m lucky to have the experience of my coach Pat (Ryan) and the other coaches from Portlaoise boxing club in my corner.

The development of Portlaoise Boxing Club to the Centre of Excellence/ Boxing Academy standard gives me everything I need to be a world class athlete”.

Meeting Michael is akin to chatting with an old friend. He has a modest demeanour but speaks with confidence as he reveals his anticipation to his upcoming trip to Doha,Qatar to compete in the World Championships, the qualifying tournament for the Olympics.

Michael is accustomed to competing and training abroad and he has travelled extensively with the national team and with Pat Ryan over his years in Portlaoise boxingclub.

“I’m lucky to have competed in many international and multinational tournaments.

In 2006, I travelled to Portsmouth at the age of 13 and won my first European Gold medal.

In 2008, I finished in the top 8 in the World Championships; I lost to the boxer who went on to win the gold. I won the national Youth championship in 2011 and this put me on the national team to compete in the European championships in City West that same year. I reached the final against a Russian boxer but lost on what Pat (Ryan) calls the ‘mathematically mystery final’”. Pat chips in “They had a new boxing scoring system at the time and, despite none of the judges marking against Michael, he lost by one point”.

Following on from his successful underage performances, Michael progressed on to compete at senior level.

Michael continues “Like with underage, I trained twice a day and I travelled to numerous training camps in England, America, Poland, Spain and Australia to build up my confidence, improve my technique and to learn how to perform and win at senior level.”

Pat recalls “Our main objective then was for Michael to win the senior championship.

This was a difficult task. Our club has been going since 1930 and the last Portlaoise man to win one was Joe Kerry in 1943. Kerry’s victory in the senior light heavyweight was accredited to ‘The Phoenix Boxing Club’ as Joe worked in Dublin at the time. Michael was up against it in the 2012 final and he fought former Olympian and European silver medalist Darren O’ Neill.

That was the biggest fight of young Michael’s career at this point in time and his pace, talent and intellect shone through and he defeated his opponent and went on to compete at international level. His first senior international contest was against a world champion from Kazakhstan. It was a tremendous battle and

Michael lost on a split decision. His performance fully endorsed his arrival at international level and made everyone around him aware to something we always knew; Michael is a world class athlete.”

Pat continues “Michael has a number of characteristics and traits that separate him from the middle tier to the top. To perform and win at major international tournaments a boxer must have the ability to be calm and relaxed under pressure. Michael has these traits in abundance. He has to be the coolest boxer I have ever worked with; nothing fazes Michael because of his belief in his own ability to perform at the highest level.

“His reaction time and reaction speed is phenomenal, his quick reflexes, graceful movement and fast hands are all definitive qualities of a champion”.

Prior to this year’s European Olympic Games Michael boxed in the European Union Championship. He beat the Kazakhstan world champion he had lost to the previous year to get a silver medal. Performances like these gave him greater self-belief; winning breeds’ confidence – not that Michael lacks confidence!

How does this Laois athlete prepare for his, and Portlaoise boxing clubs, first World Championship?

Michael smiles humbly, as though oblivious to the realisation that, in a years’ time, he could be an Olympic athlete. “I train in Portlaoise three days and Dublin three or four days a week. The road to Rio is really kicking in now. We are back in training and have completed the first number of track sessions (laughs from Pat as the track isn’t Michael’s favourite). This week I am going to a training camp in Sheffield to train with the Great Britain team and a number of other international teams will be present. This gives me a great opportunity to spar against international competition and it assists with my preparation for the World Championships in October”.

What does he find hardest about training and travelling?

“I miss my family (his wife Chantelle and daughter Sue-Ellen (3) and son Michael John (2)) and it’s hard enough when I’m away but that’s the sacrifices I have to make and my wife and family fully understand. When I’m away I use Viber and Whatsapp to keep in contact with them and I can send pictures so they can see what I’m doing in the different countries.

“I had ten days off after the European Olympic Games and I got to relax at home and catch up with them which is a rarity these days. My family have been behind me since the beginning. You need that support around you if you want to compete at this level.”

His coach Pat Ryan, who coincidentally shares a birthday with Michael, paints the bigger picture on the training programme for Doha.

“All the indicators are that Michael has a very distinct possibility of making Rio but his first thoughts are primarily on the World Championships. I’ve been asked a lot in the past few weeks what does it take to be a champion?

“If we were to analyse Michael O’Reilly one would have to say firstly that the characteristics and traits that he possesses have all the hallmarks of a champion.

“He is a very self-directed young man and self- confident. He’s dogged when he has to be and, inside the ropes there comes a time, where one must show the moral aspects of the game which is how courageous one needs to be and Michael has that.

“He is responsible and he doesn’t make excuses forlosing and he will take the consequences for same. When he comes inside the door of the gym he takes instruction and correction without any word and he has never back answered me in twelve years.

“He still has room to improve on his strength and conditioning programme. It’s important not to overload these programmes because of the weight categories. It’s all about evaluating his musculature system and the exercise prescription is specific to Michael’s needs.

“We have to make sure he doesn’t over do the power lifting or he will be moved to the next division (light heavy). He maintains a good diet and trains twice daily.

“Recuperation and recovery are very important principles in training and he takes recovery drinks prescribed for him by the dietician. His training regime is strong, rigid and imperative for his success. The durations are ninety minutes and are designed to work all the components of fitness; strength, muscular endurance, power, co-ordination, flexibility, reactions, neuromuscular and physical training.

“We work on various drills to develop and increase his explosive speed in punching and acceleration speed in attack which is necessary to compete at the highest level internationally. Part of this programme is achieved through various types of sparring; school boxing, school combat, specific sparring and open sparring. Sparring partners are selected for different purposes; one heavier or one lighter, orthodox, southpaw, small, tall etc. to give him a well rounded training programme for combat”.

All the funding to get Michael this far has come from Portlaoise boxing club and Michael.

Due to his phenomenal year it is expected that he will be in receipt of funding from the Irish Sports Council. This is a relief for Michael “It’s been extremely difficult travelling around to different venues and trying to get the financial support necessary for it all.

“Again, I’m very lucky that Portlaoise Boxing Club have believed in me and supported me for the last 12 years because I wouldn’t be here today without them. In time if I keep my winning ways I’ll be able to repay them for all their work and support”.

Now that his Olympic dream is almost a reality maybe this “time” isn’t as far away as he thinks.