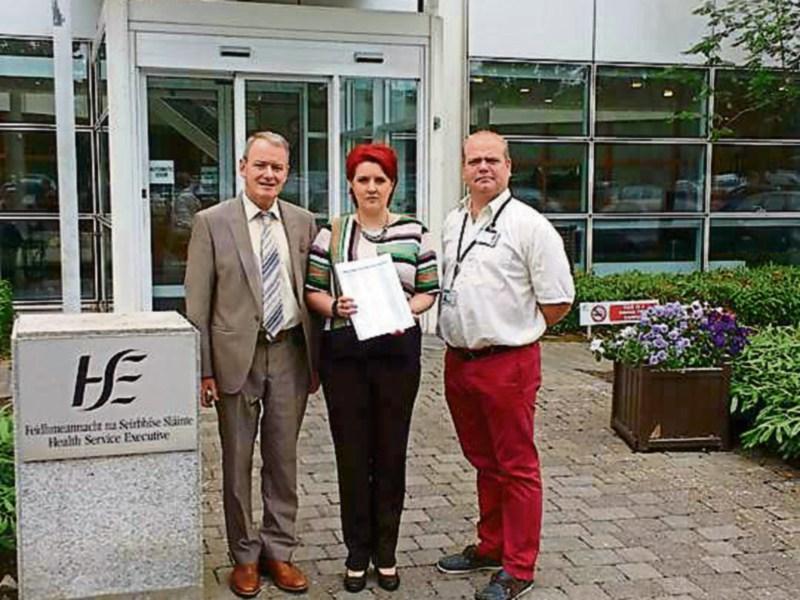 The HSE has received a petition backed by some 4,000 people in Laois and Kildare opposing a downgrade at Portlaoise hospital.

The issue has also hit the headlines in Kildare where county coucillors have protested against possible downgrades at both Portlaoise and Naas hospitals.

Last week Laois TD Brian Stanley accompanied by Kildare councillors Cllr Thomas Redmond and Cllr Sorcha O'Neill handed in a petition calling for the retention of the A&E/ED in Portlaoise Hospital to the Regional Manager, David Walsh in HSE headquarters in Naas.

"The petition was signed by almost 4,000 people in Kildare and Laois.

"The Government need to stop hiding behind HSE management and whatever reports, proposals or plans that they might produce."

"The responsibility for having a regional network of resourced and functioning emergency departments rests with those in power," he said.

"The Government needs to act now on Portlaoise hospital and remove the threat hanging over emergency services once and for all. Laois and South Kildare cannot be left without 24 hour A & E services. There are too many lives at stake,” he said.

The matter was raised in two motions at the Kildare County Council’s July monthly .

Cllr Mark Wall, Labour, believed someone was flying a kite through leaking a report to the media which said Portlaoise and Naas were on a 'hit list' but he added. “There is no smoke without fire.”

But Fine Gael Cllr Darren Scully was adamant there would be no closures.

“No A&Es are going to close,” Cllr Scully told a debate on a motion calling for clarification by the Minister for Health.

Cllr Redmond said GPs had held a meeting with the Minister and the HSE’s Dr Susan O’Reilly.

“You need to be worried when Cllr Scully says nothing will happen.

“Something is going on,” he said.