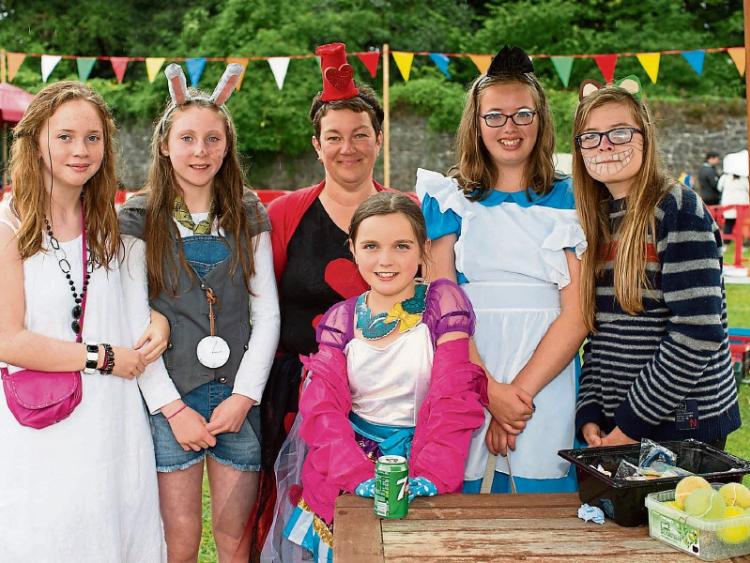 There was rain but not enough to merit postponement or even dampen spirits at the annual Abbeyleix Parish Fete held on Bank Holdiday Monday, August 1.

“Strange though it may sound we were actually lucky again this year and lived on the edge of ‘proper’ rain for the first two hours of, when it ‘just drizzled’ slightly!” said Canon Patrick Harvey.

Taking place in the Rectory walled garden, Canon Harvey said people were delighted to welcome Mrs Mary White, a driving force in the community that is Abbeyleix, and a long time supporter of Fete, to officially declare the Fête ‘open’.

“Mary told us that the first function she attended after she came to Abbeyleix in 1969 was the Rectory Fete, then in its infancy.

“We were very grateful to all those who came to support this venerable event, now in its fifty fourth year, despite very uncertain weather,” he said.

Attractions included the wheel of fortune, bowls, ducking barrel, teas, various raffles, guess the weight of a bale, ‘Win a flight in a glider’, the hot dog & ice cream stand, cake, books, white elephant & bottle stalls, country produce and a stall with vegetables from the Abbeyleix Grow It Yourself allotments.

“Grateful thanks also to the Fête team, much hard work goes on behind the scenes preparing for the day, setting up the garden, and then running the stalls, side shows and games and in preparing and serving the teas. We are, as ever, very grateful to our many sponsors who support us generously annually.

“On behalf of the Parishes of Abbeyleix, Ballinakill & Ballyroan, which benefit from the day’s fundraising, I want to thank, sincerely, all who come, rain or shine, for their continuing generous support of our Fête,” concluded Canon Harvey.