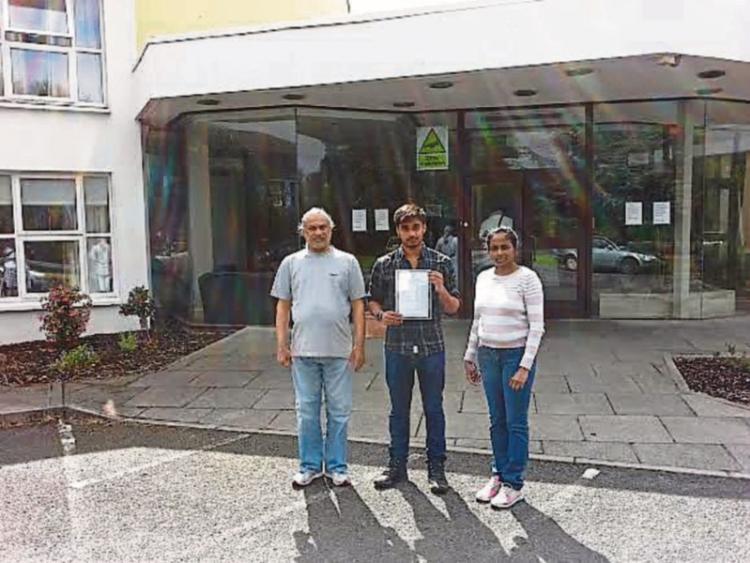 Originally hailing from the Erravur region of Sri Lanka, Teron has lived with his parents Ingrid and Terrence in the Direct Provision Centre in the Montague Hotel since they arrived in Ireland over eight and a half years ago.

Teron was aged nine when his father, mother and grandfather moved from Sri Lanka in 2007.

The move was prompted by the dangerous and volatile situation in the country at the time, which saw constant fighting between opposing forces.

The family decided on Ireland as their destination, and Teron admits to not remembering much about their former life in Sri Lanka.

Upon arrival in Ireland the family spent five days in Hatch Hall, before been transferred to the Montague Hotel in Emo.

The family have lived there since.

Teron's grandfather was granted asylum status in 2009 and moved into Portlaoise to live. Sadly, he passed away in 2011.

Teron still lives with his parents at the Montague, but now hopes to move to Carlow to study Aero engineering.

The family's attempts to get asylum status have failed, but last June their application for subsidiary protection was accepted, which now allows them to stay in the country indefinetly and leave the Direct Provision system.

For Teron the timing could not have been better as it now allows him to qualify for a Susi grant to study in Carlow.

Upon moving to Ireland , Teron initially stayed in one room in the Montague with his parents, but since then has received his own room. He is upbeat about the system.

“Honestly, I think I got lucky. The Montague is genuinely a very nice place for what it is,” he stated.

Teron's family built a good rapport with the fellow residents in the Montague.

Over the years, however, they have seen many people coming and going, and new people are arriving all the time.

“There are up between 100 and 150 people living there now,” said Teron. “Everyone kind of leads separate lives and, of course, everyone wants to get out.

“Living in Ireland has been great, and I've made some great friends.

“Plenty of opportunities have been given to me during my time here.”

“I was treated the same as everyone else there. It was a quick and painless transition.

“Irish was a big step up, but eventually by the end of my time in Emo I had a fairly good grasp of it.

“The teachers were great, as they were also at Portlaoise College.”

Receiving his Leaving Cert results last Wednesday, he admits to been more excited than nervous.

At 17 he was the youngest graduate in his class of 50 to 60 at Portlaoise College.

Teron has no wish to go back to Sri Lanka on a permanent basis, but is not averse to the idea of returning for a visit sometime in the future.

He is excited about the next chapter in his life, and is looking forward to moving to Carlow.

His parents hope to move there also.