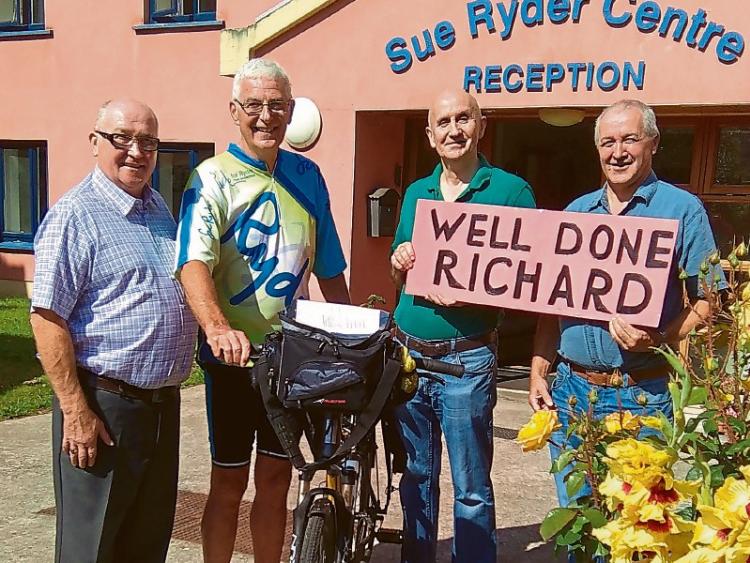 Richard set off from the Sue Ryder Leckhampton Court hospice in Cheltenham where his wife had been cared for in her final weeks.

His ten day cycle via ferry ended at the Sue Ryder centre in Portlaoise, where he was warmly welcomed by Sheila's brothers Tony, Gerry and Jim McCormack.

“It was like a memory trip for me. I went along the east coast where we had stopped over the last 43 years when coming over to visit family. She would say I’m mad for doing this,” he smiled.

The McCormack family were originally from Ratheniska, and then moved to the Dublin road in Portlaoise.

Sheila moved to Cheltenham in 1966 for work.

The couple met and married and had a son Peter and a daughter Sally, and later three granddaughters.

Sheila passed away last February from the rare conditions scleroderma and interstitial lung disease, which she had battled for the past 16 years.

She had bought her husband the bike for his birthday.

“I decided I would like to cycle to her hometown in her memory, and for all the help and care that Sue Ryder gave us,” said the widower, who admits his journey has helped him cope with his grief.

He set up a fundraising webpage, and is “very delighted” to have managed to raise £2,400 for the Cheltenham centre.

The retired engineer is no stranger to cycling.

“I used to cycle to work and I have done quite a few charity rides. I did a 56 mile one before I came away,” he said.

“I had a head wind most of the time. I had no problems whatsoever, not even a puncture,” he said.

He got a kindly welcome at each B&B en route.

“I stayed in Blackwater for a few days, and in Gory I took a day off and golfed. I stayed in Baltinglass and they never charged me after they saw what I was doing.

“It’s been amazing, I would do it again,” said Richard, who plans to visit more Irish relatives, in the comfort of a hire car.

The McCormack family held a gathering for him when he got to Portlaoise, and are thrilled at the tribute to their late sister.

“It’s a fantastic achievement. I’ve been in the Sue Ryder hospice in Cheltenham, it’s a fantastic place but they find it hard to get the funds to keep it going. It is a great achievement at his age, and he was lucky with the weather,” said Jim.

“We were worried about him doing it on his own, but we got a text each night to say where he was, “ said Gerry.