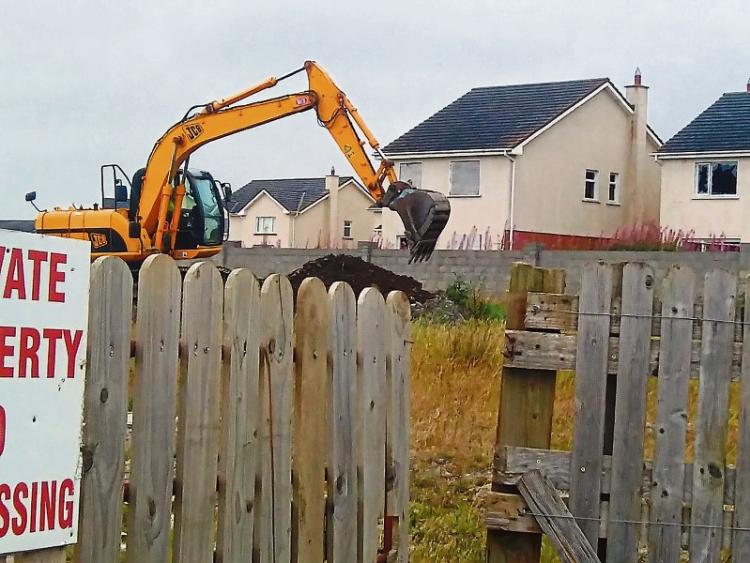 Work is underway to clean up a vandalised unfinished housing estate in Portlaoise beside the town’s primary schools, but there is no plan to finish the houses in the near future.

Brian Dempsey is a director with Aston Homes, developers of Aghnaharna estate.

“This is general maintenance to keep vandals out. Every time they get in and do damage we have to make it safe,” he said.

Mounds of earth are being levelled and the fence re-secured at the site, which is next to Summer hill primary school campus.

Half a dozen homes were left unfinished some years ago after the housing crash and have been since vandalised, with smashed windows and patio doors which Aston Homes have blocked or boarded up.

Mr Dempsey says they are trying their best to get all houses in the estate finished and sold.

“We don’t want them sitting there. We haven’t abandoned them. In the last year we have finished off a cul de sac that was also run down, in conjunction with Laois County Council. A few houses have sold but two are still for sale,” he said.

Another section of Aghnaharna was finished and taken in charge by the council.

“We got that section taken in charge with the help of the residents association. We are working away and getting it finished bit by bit. I would love to say we have all the money to finish it off but we are not in that position, we are trying our best,” he said.

While unable to give a date for when the houses, facing the southern circular route, will be finished and put up for sale, he said “we hope to be out of there in less than two years”.

A further four detached houses on the land now being levelled, have planning approval and were to be started a year ago.

“I would love to build them but we have to be able to sell them,” Mr Dempsey said.

More of the unfinished houses and foundations for an apartment block beside the vandalised houses, are owned by TopTree Construction from Cullahill, unavailable for comment.