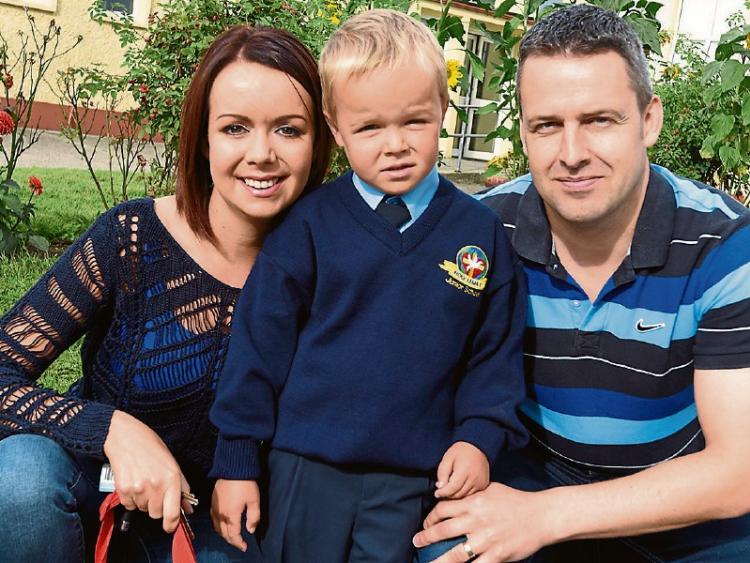 Six classes of junior infants are among the 1,400 children starting school this week in the new Holy Family Junior and Senior schools in Portlaoise parish.

The new Junior School's principal Enda Hickey is taking all his 700 new charges, from junior infants to 2nd class, and their 38 teachers, in his stride.

“They are all well settled in. There was a plan in place before the holidays, so people knew where they would be. We didn't jumble classes up, they were left as they were in an effort to make the change as smooth as possible. We all know each other, the children are happy to see their old friends, the juniors to make new friends, and the teachers are all working together for a long time,” he said.

In a big shake up, the two mixed schools replace three in old town centre buildings; St Paul's, Scoil Mhuire and Sacred Heart, with at least six classes in each year.

Their new crested navy uniforms can be phased in as the old ones wear out.

With construction delays on the new campus in Aughnaharna, the children must wait until January to step over the threshold, for now divided amongst the old buildings.

“We weren't expecting to be there yet but it's a bit of a disappointment. However we are used to these buildings so it's not a bad way to begin,” said Mr Hickey, who added that months of meetings between staff, boards of management and parents councils have made the transition a smooth one.

The big move to Aughnaharna will be conducted over Christmas holidays.

“We will look at how best to move closer to the time,” said Mr Hickey.

“Even though we had hoped that the new schools would begin their life in the impressive School Campus at Aughnaharna, it is perhaps fitting that they begin in the buildings that represent their origin, but we do look forward to Christmas!” parishioners were told in a recent parish statement.

“There's a bit of movement between the two, but we try to limit the movement for children,” said Mr Hickey.

The Holy Family Senior School also operates across two buildings, St Paul's on the Borris road, and a prefab beside the old convent, with principal Des Sutton.

The Aughnaharna campus is already too small for the town's mushrooming population. Work on extensions will begin straight after it is finally open in 2017.