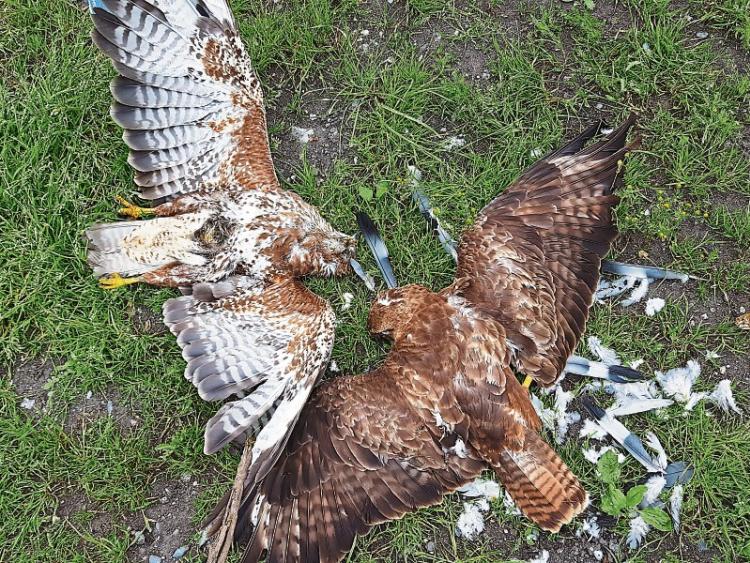 Help is being sought from the public following the discovery of three protected birds of prey, killed by poison in a field in Cappakeel, Emo over the August Bank Holiday weekend.

A member of the public first found two birds dead in suspicious circumstances.

Staff from the Dept of Arts, Heritage and the Gaeltacht and the National Parks and Wildlife Service then visited and found another dead buzzard and the remains of a woodpigeon nearby.

Test results on the three buzzards and woodpigeon feathers showed the presence of the banned insecticide, Carbofuran, an illegal and extremely toxic poison, commonly used to deliberately target birds of prey, but also dangerous to humans and to pets.

Buzzards were persecuted to extinction in Ireland but are repopulating after wildlife poisons were banned here in the 1990s.

Despite common misconceptions, they do not eat adult pheasants the NPWS say.

”The NPWS are concerned about a noticeable increase of intolerance and fear in relation to buzzards and birds of prey in general. They tend to observe prey from a high perch and drop down by surprise. There have been some complaints recorded of buzzards causing problems to young pheasant poults at release pens. Proper pen design and location should help,” a spokesperson said.

“They are now a common sight in the midlands and their presence as an apex predator is a good indicator of the general health of the environment as they are filling a vital ecological niche.

They are often seen on the ground following ploughs or mowers where they are feeding on earthworms, frogs, insects and small mammals. They can be seen at harvest congregating around corn fields that are being cut where their prey is rats. They are often seen feeding on road kill and other carrion,” the spokesperson said.

There have been a number of recent successful prosecutions taken by NPWS for the use of pole traps targeting birds of prey at a pheasant release pen in Laois, and the targeting of peregrines by a Waterford based pigeon racing club using tethered live pigeons smeared in poison.

It is an offence under the Wildlife Acts to kill a buzzard or any other bird of prey listed under Wildlife Acts.

It is also an offence to use poison indiscriminately in the countryside.

Penalties on summary conviction for either offence include a maximum fine of €5000 and/or 12 months imprisonment.

Anyone finding a suspected poisoned bird should not touch it but contact the NPSW ranger immediately.