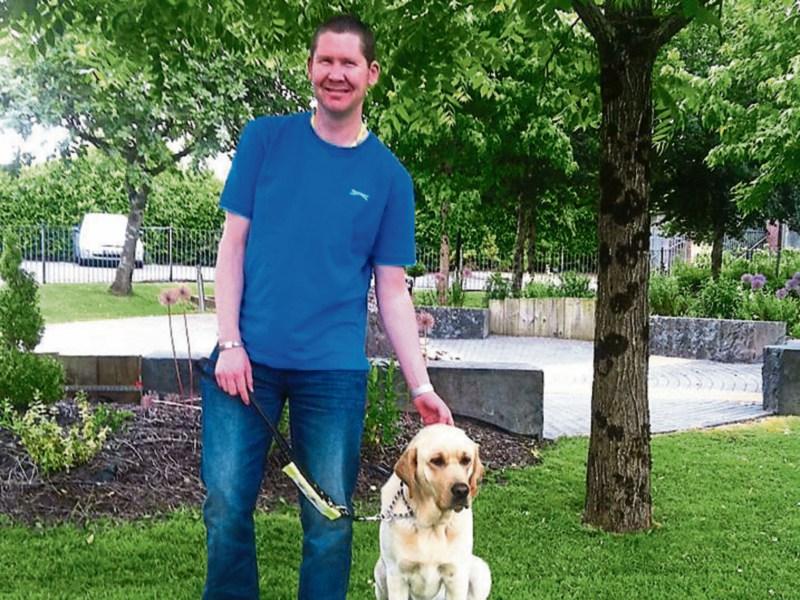 Portarlington native Gavin Allman has signed up to climb a 30 foot rock wall in aid of the Irish Guide Dogs, for which he says being blind is “a big advantage”.

“It has the odd advantage, and I would consider this a big one, that I can’t look down. I can’t even imagine being at the height of 30 feet,” he said.

He is one of ten blind climbers taking on the 30 ft ‘Awesome Challenge’ in Cork on October 20, in aid of Irish Guide Dogs for the Blind on their 40th anniversary.

“I've driven enough people up the wall over the years, I decided I'd go up the wall myself,” he joked.

“I am so happy with my dog and the service they provide and I know how much they need the money. To train and monitor a guide dog for its working life costs €38,000 per dog. 85 percent of their income is from donations, so I thought why not give something back,” he said.

Aged 36, he went gradually blind as a young man.

“My optic nerves basically died over time. I was registered legally blind when I was 21,” he said.

“I couldn’t accept it for a while. I finally did long cane training when I was 23, and when I was 25 I got my first guide dog, and started to accept it,” he said.

He is now on his third guide dog, a labrador retriever cross called Marvel that he qualified with on June 30.

“You can walk a lot quicker and with more confidence, with a dog rather than a cane, and go on routes I couldn’t manage otherwise. People are far more friendly and approach when I have my dog, and of course they are great companionship. A dog is like a child, you have to groom it, walk and feed it, and that means you have to get out of bed and keep in a routine,” he said.

Over the years, he has taken part in many sporting events.

“I did four charity tandem cycles abroad, and represented Ireland at the Paralympic World Cycling Championships in 2007,” says Gavin, who walks 2.5km a day and cycles twice a week.

He has climbed a rock wall once before.

“I did one four years ago, I have no idea what height it was, I went into it blind in more ways than one, You just put your foot on the first hold and feel your wayup,” he said.

He is holding events in Kilkenny where he now lives, and back in Portarlington, where his parents Pat and Anne, sister Roslyn and the community are all backing Gavin in his climb.

“They are all saying fair play and go for it,” he said.

A table quiz takes place in the Barrow Lodge on September 16 at 8pm.

“Any donation is great, nothing is too small, I don't expect people to give big amounts,” said Gavin.