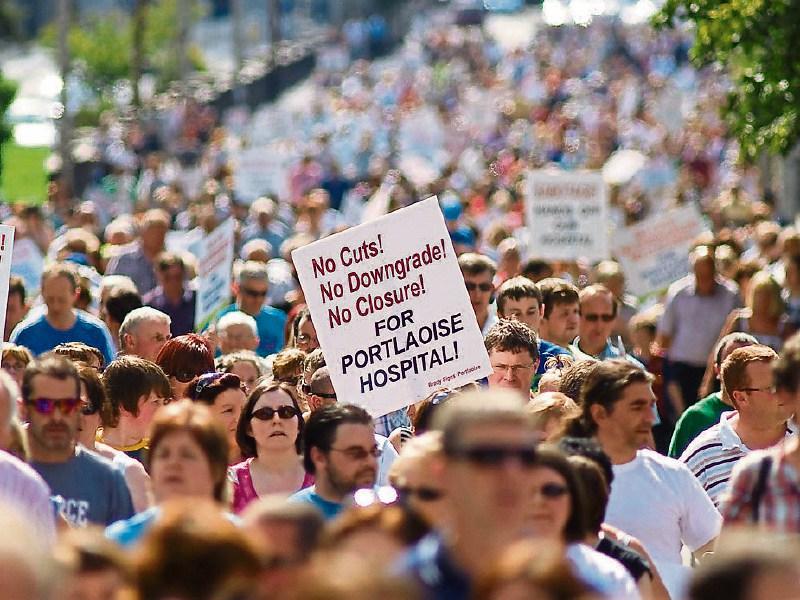 Laois doctors have argued for new thinking when it comes to reconfiguring hospitals and have put forward a plan for the Midlands Regional Hospital, Portlaoise (MRH Portlaoise) as the template for how downgrade can be avoided and services improved.

In their report entitled 'The Future of Acute Services at MRH Portlaoise, the Local Stakeholder Perspective', the GPs and consultants put forward proposals on what should happen next. The doctors views were not sought by health management for a downgrade draft plan submitted to the Deparment of Health earlier this year.

The doctors argue that the draft plan, drawn up by Dr Susan O'Reilly of the Dublin Midlands Hospital Group, would, if implemented, downgrade Portlaoise to a model 2 hospital and result in the closure of acute services including paediatrics, obstetrics, gynaecology, A&E and intensive care.

It would also, they say, severely curtail acute adult medicine and general surgery.

“Such a plan does not make for safe, effective or patient centred care. Rather it repeats past mistakes,” they say.

“For patients of the midlands, where there is no model 4 or hub hospital, the risks of down-grade outweigh any argument that might be put forward in its favour,” they stated.

However, the doctors realise change must happen at Portlaoise. Their proposals require more resources but also acknowledge the scaling back of some services. Their plan is based on the solution applied to maternity services in the wake of the deaths of babies in the unit. The doctors believe health management should extend this solution hospital wide.

“We recognise the pioneering work of the Dublin Midlands Hospital Group in fostering the managed clinical network between Portlaoise and the Coombe Women and Infants University Hospital. This initiative provides a template for safe, sustainable and patient centred care at Portlaoise and should be extended across the range of clinical specialities.

“We believe that the safe and correct way to proceed is to continue to provide acute services at Portlaoise with appropriate support from the hospital group. We do not make the argument for the status quo. People in this area of the midlands have seen their healthcare under-resourced. They deserve just provision for their healthcare,” said the doctors.

The doctors point out that some of the services at regional level require re-configuration due to the low frequency of demand. “Low demand for services may result in levels of service provision that are either too limited to justify continuance or to facilitate maintenance of adequate skill base. In certain situations technology can favour centralisation.”

The doctors say there is no blueprint to manage the fallout from downgrading a hospital which offers the range of services provided by Portlaoise. They argue that past failues to invest cannot be used as a reason to not to invest now.

“It would, however, be a perverse response to a community's needs to suggest a further withdrawal of healtcare resources as a solution to the problem of under-resourcing.”

The doctors believe Portlaoise could be a blueprint to avoid the mistakes made in previous downgrades. “New thinking is needed nationally, along with a new set of solutions to support acute services in regional hospitals,” say the Laois doctors.