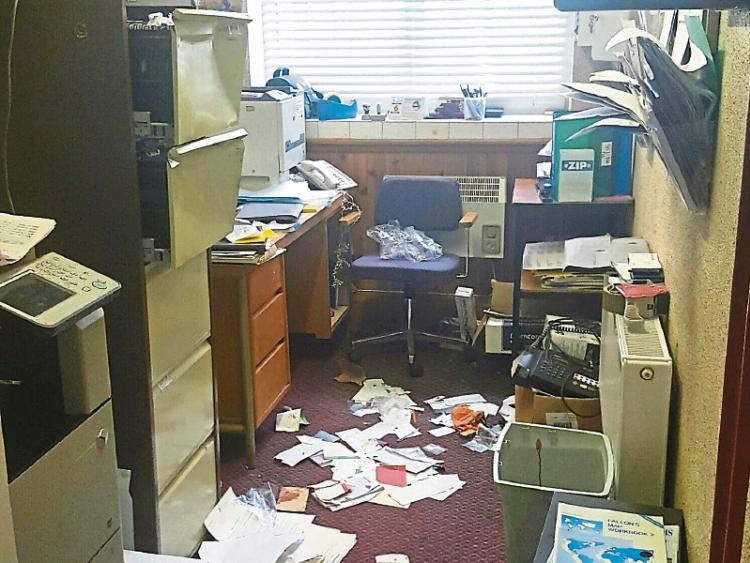 Thieves left bloodstained scenes behind them after smashing their way into two Mountrath primary schools last week, with a local business also burgled..

St Fintan’s Boys NS was the hardest hit, as it was the second robbery in a week.

The first robbery was discovered on Tuesday August 30. Staff returned to work to find smashed windows and a broken alarm, and thirteen laptops stolen.

It was the day before pupils returned to their lessons, so the staff had to clean up as well as prepare for lessons.

“It was upsetting for both the children and the staff. We were mindful of the children returning the next day so we had to work hard to make sure it was a safe environment,” said acting principal Gina Reddy

One of the laptops was for a child with visual impairment, with braille software that the school must reorder.

“It’s hard enough to get everything ready for the first day back, it means now that the children won’t get ICT lessons until we get them replaced,” she said.

The second robbery in St Fintan’s happened around 2.30am last Wednesday morning September 7.

This time the thieves again smashed windows and the alarm box, and thrashed the school office, breaking open a safe and a filing cabinet.

“We had fixed our windows and our alarm and were getting back to normal, then we were back to square one. To face another break-in, with everything turned upside down, it’s not a nice feeling for the staff or the children, that somebody came in and did that,” Ms Reddy said.

Blood was spilled on the window blinds, requiring contract cleaners, adding to the school's costs.

“We have to replace four windows, two alarms, a safe, a filing cabinet, some of our appliances, and the 13 laptops and software. The cost will be huge but we will do our best to get back on track now,” said the acting principal.

The 74 pupil school has to fundraise again to replace the equipment she said.

She appeals for people not to buy suspect secondhand laptops.

“Please be vigilant and notify the guards,” she said.

“There was a great amount of damage carried out and both schools were covered in blood as one of the hooligans cut himself in the first break in,” he said.

“It is hard enough for these schools to do their day to day business of educating the children of the town but for to be attacked in such an outrageous manner has really had an effect on the staff, caretakers and pupils. It shows a total lack of respect for the people who are doing their best in playing a vital role in the formative years of our children,” Cllr Kelly said.

Two people were apprehended at the scene of the second break-in, with one understood to be a juvenile.

A break-in had taken place initially on August 26 at CJ Sheeran’s pallet plant in Mountrath. Three trucks were broken into, with their consoles damaged and radios stolen.

Gardaí have been given CCTV footage of the two burglars on site.

“We have had break-ins in the past, and we spend money on our security but the three Gardaí stationed in Mountrath need to be here continually, not seconded to other areas,” said owner Mark Sheeran.