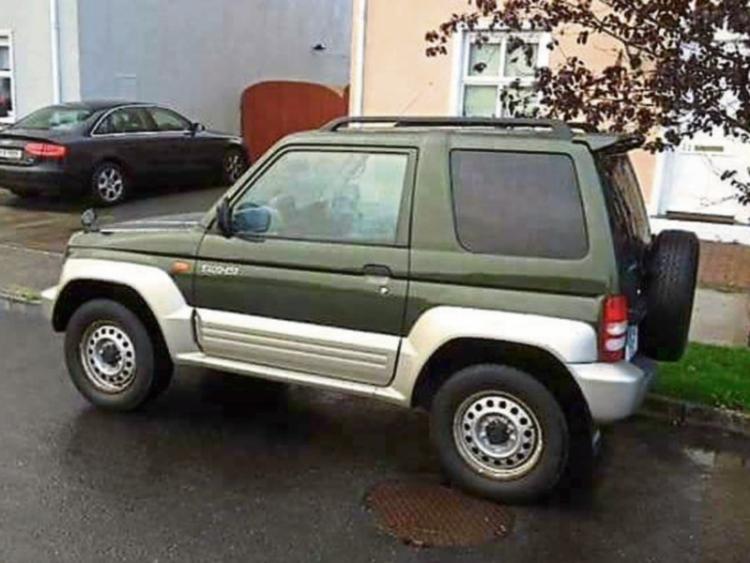 'Brazen' thieves spent half an hour replacing the flat battery of an elderly lady's jeep, in order to steal it in Mountmellick last Thursday morning September 15.

The twenty year old jeep, a dark green '96 automatic Mitsubishi Pajero, registration number 96 KE 7092, was stolen at around 2.30am from Wolfe Tone Street, from outside Kavanagh pub.

It was owned by elderly grandmother Mrs Frances Kavanagh, who has arthritis but was able to climb in and out of the high seated jeep quite easily.

“It gave her great independence after my dad and then my sister passed away. She was able to use it to get to the church and the graveyard,” her son Justin told the Leinster Express..

The jeep's battery had been flat for some weeks, as Mrs Kavanagh is waiting for an operation to make her more mobile again.

Her son believes the thieves had made a previous visit, and then returned with their own battery.

“They pushed it around the corner out of sight and they left the old batter y there. To brazenly go up and open the bonnet to replace the battery, we can't comprehend it,” said Justin.

The night in question was a rainy one, and he suspects that the thieves chose the night deliberately so that any CCTV footage from nearby businesses would be distorted by raindrops.

“They knew it would be distorted in the rain. They knew what they wanted, but why they wanted it I don’t know,” he said.

However CCTV evidence does show two men driving towards the house at 2pm, and driving away at 2.38.

That footage has since been passed on to Mountmellick Garda Station, which is just across the road from Mrs Kavanagh's home.

Her son also posted a heartfelt request for information on his social media page.

“The jeep was bought to get her out and about and try cheer her up, and now these heartless thugs have taken that away from her,” he wrote.

“I bought the jeep as a gift for my disabled mam because it's automatic and has 1.1 small engine,as she suffers with rheumatoid arthritis. Since our dad died she didn't go out as much as she used to, then our sister passed away in 2012 and she almost stopped going out,” he said.

So far there is no news on finding the jeep.

“We are hopeful because it is very distinguishable, if anyone has information please will they contact Portlaoise Garda station,” Justin said.