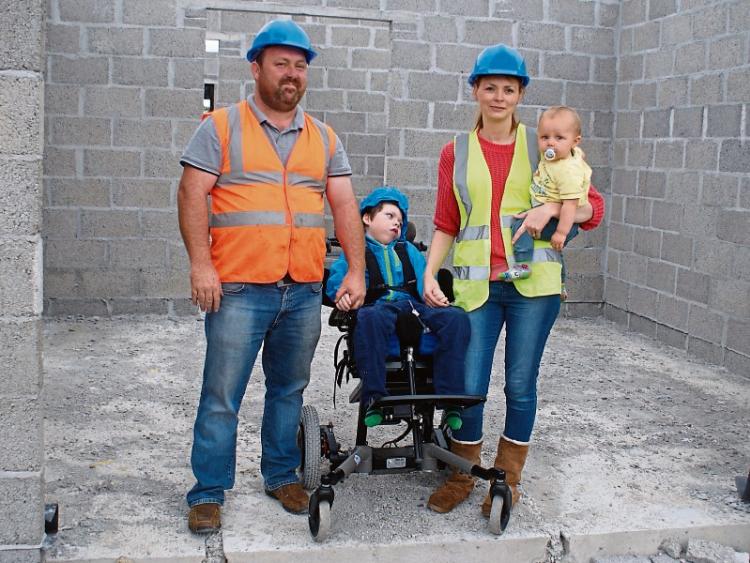 Mountmellick parents Nicolette and Terence Connolly are coping with the tragedy of losing their son Jake, cherishing the time left with his brother, and determined to finish building a special home in their name.

Nicolette has opened up about their heartbreak of losing Jake aged 2 last January, to the same rare condition his brother Ben has, Allan Herndon Dudley Syndrome.

“ Our lives were torn apart beyond recognition on 22nd January. While Jake was ill in hospital he was never expected to pass. It was the biggest shock of our lives and I still look at his photo, shake my head and can't believe it. Nothing is touched, everything is still where it was. I keep thinking how did this happen. Parents are not supposed to lose a child,” she told the Leinster Express.

The family began their public fundraising campaign in 2014, after Jake was diagnosed with the same rare condition as Ben.

It causes progressive brain damage and leaves them unable to support their bodies, with a short life expectancy.

The family lives in a cramped two storey house, filled with hospital equipment, with no room for a lift.

They had to stop working to give their boys the 24 hour care they needed, and so fell behind in their mortgage.

With the public quickly rowing behind them, hope grew to build a single storey house for the boys, with wheelchair access, hoists, a wetroom, and a sensory garden, to make their short lives safe and comfortable.

After they eventually passed away, the house would be given to the community for use by families with children of similar needs.

Sadly Jake will not see the house, which is now halfway built. It is hoped it will be finished by June 2017, depending on another €150,000 of public donations.

Nicolette admits the fight went out of her after Jake's unexpected death.

“Itt has been bittersweet to be honest to see the house t go up. When Jake passed I lost all interest...the fight was gone. But then I needed a kick as I still have to think of Ben. Seeing the foundations marked out was very upsetting as I could see where Jakes bedroom should have been and I found that very hard.

But for Ben I have to remain positive and fight on and remember why I wanted to do the whole project to begin, to give Ben and Jake the medical facilities to live in a suitably adapted home for their needs and also as a permanent reminder and tribute to the community for other families to use when both are gone. To say their lives had a purpose,” said their mother.

Asked what has kept her going since Jake's passing, she said “you don't recover”.

“What has kept me going is talking and laughing about Jake and his cheeky personality. Its an emotional rollercoaster so having bouts of emotional blocking when things get tough. Ben & Billy have kept me going I have had to for them. If I didnt have them to distract me I don't know what I would have done. Silly or harmless things randomly set you off. Its definitely a journey, not a destination. I am different I am not the same and never will be. You dont 'get over' or 'move on' you just have to adjust to surviving with the pain,” she said.

”Its always a worry coming into the winter. He ended up in hospital earlier in the summer which was tough going.

“It was also the worry for Bens health so soon after Jake's unexpected passing. As much as I worried before for their health I worry even more now after Jake being taken so quick - but touchwood he's good now,” Nicolette said.