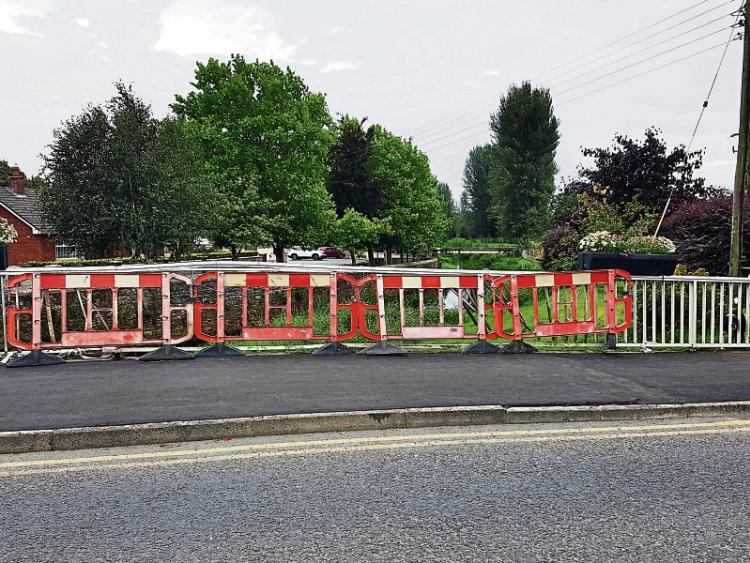 Railing on a bridge in Mountrath that was smashed in a car accident last January, is still patched with an ugly barrier eight months on.

Local groups want the metal railing replaced by a stone bridge, and accuse Laois County Council of neglecting their town.

The Community Forum and Tidy Towns groups are worried that the bridge railing is both a safety hazard and a deterrent to tourists.

Carina Wallis is on the Tidy Towns group, who put up flower boxes to try and beautify the bridge.

“We have been doing our best, to make it look nice, this is the entrance to the town,” she said.

The metal rail is “characterless”, and in the past has got “not very positive comments” from Tidy Towns judges she said.

“It adds nothing. Now it is damaged it is the opportune time to replace it,” she said.

She accuses the council of neglecting the town.

“We all pay our taxes here, we should have a say. Mountrath has been neglected for so long, the local community is doing its best but we require help to keep it on the map,” Ms Wallis said.

Last January a car smashed through the bridge rail at Patrick Street, landing upside down in the Whitehorse river below.

In what was incredible luck, the river which is subject to flash floods, was low on the day, the car landed on a silt bank and the driver walked away.

The council blocked off the gap with plastic barriers but there is no sign of a replacement rail.

The chairperson of Mountrath Community Forum is Martin Meade.

“A stone bridge would be a lot stronger, and would look better for tourism. That is what was there originally. It would be a step in making Mountrath the vibrant hub it could be,” he said.

“Our committee feels that Mountrath doesn’t get the same attention as Rathdowney, Abbeyleix or Durrow, they seem to get projects done a lot quicker with more funding,” he said.

They contacted Cllr James Kelly who raised the issue to Laois County Council.

He said what is needed is ”a proper stone structure instead of the flimsy metal structure”.

“I and a number of the community groups have made a strong case to the council that funding be allocated from the recently launched Town and Village Renewal Scheme whose aim is to begin breathing life back into our rural towns and villages,” said Cllr Kelly.

“I firmly believe that the new stone bridge will help kickstart a number of projects that our community groups are engaged in to enhance the town,” he said.

He estimates the cost of building a stone wall on the bridge to be €40k to €50k approximately.