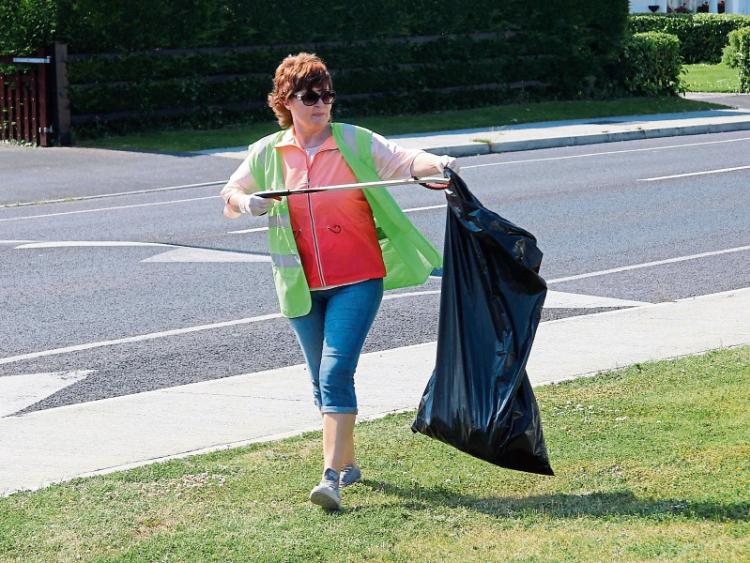 Portlaoise’s ‘Tidy up the Town’ returns for a ‘Part 3’ this Saturday, September 24, and every community in the county town is urged to come out to tidy it up.

The clean-ups were first held in the spring and summer this year.

They were a resounding success, with business people and residents, young and old alike, coming out to put on their gloves and clean up.

“Last time we had about 60 volunteers despite having bad weather. Most of them were from residents associations and housing estates,” said one of the organisers, jeweller Gerry Browne.

“We get great support from Laois County Council too, they take away the rubbish, and provide us with anything we need, like bags and litter pickers,” he said.

The first 'tidy up' gathered up an impressive 8 tonnes of litter.

The second only collected 4 tonnes of mostly litter and weeds that the volunteers pulled up as they worked.

The drop in rubbish collected is proof of how the town stayed cleaner Mr Browne believes.

“We are collecting less and less, as people are getting more aware,” he said.

The cleaner streets helped in the town's national rating by the Irish Business Against Litter group.

“The real difference is in the IBAL listings, we have gone from 40 to 20, a great improvement, all that effort is rewarded,” said Mr Browne.

He is a member of both Portlaoise Tidy Towns, who organise the tidy up, and Downtown Portlaoise traders group, who support it.

“Nobody wants to shop in a town that is litter strewn, it is very important to every business to keep it clean outside,” he said.

He is asking everyone to come and help.

“We meet on the Saturday morning and clean up from 10am to 12 noon. We divide the town up into zones and place people in each one,” Mr Browne explained.

“We ask everybody to get out and help, it’s for everybody’s benefit,” he said.

Meanwhile Portlaoise is poised to win an award at the National Tidy Towns awards in the Helix, Dublin next Monday, September 26.

Portlaoise Tidy Towns has been invited to the awards night, meaning they have won at least a bronze award for their hard work.

See www.leinsterexpress.ie for updates on the award.