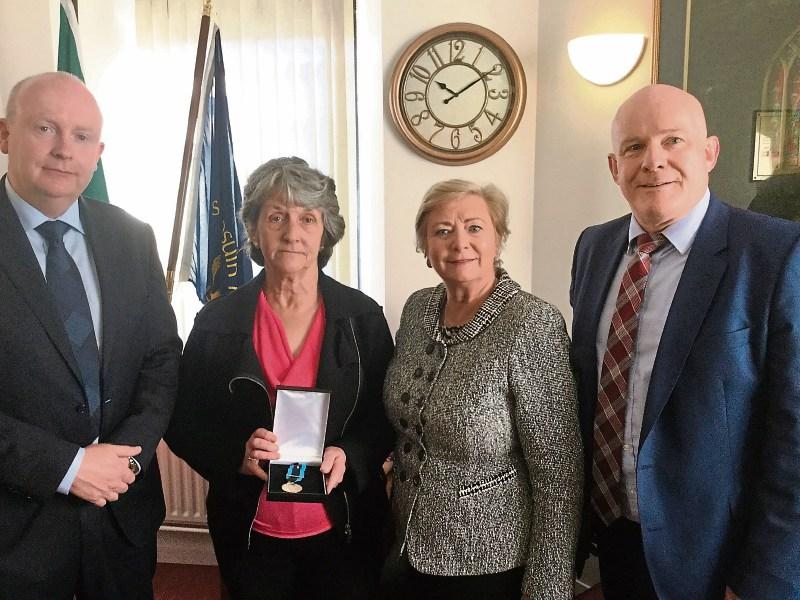 The Tánaiste and Minister for Justice and Equality today posthumously presented a Stack Medal to former Portlaoise Prison Governor Patrick Powell RIP in recognition of his brave and heroic actions in November 1985 during an escape attempt by armed prisoners.

During the attempt an armed prisoner pointed a firearm at then Assistant Chief Officer Powell and pulled the trigger, on two occasions, in an attempt to murder him.

The gun failed to discharge and due to the brave actions of ACO Powell and his colleagues the escape failed.

At a private ceremony at Portlaoise Prison, the Tánaiste Frances Fitzgerald presented the award to Mrs Esther Powell, Patrick’s wife, who was accompanied by members of her family including her sons Pauric and Cormac, daughters Mairead and Dale and also Patrick’s brother Colm who also served in Portlaoise Prison.

The event was attended by Governor of Portlaoise Martin Mullen and members of staff from Portlaoise Prison and also the Director General of the Irish Prison Service Michael Donnellan.

The Medal was instituted in 2012 with the introduction of the Irish Prison Service Merit Award Policy.

The Medal is named after Chief Officer Brian Stack RIP who was Chief Officer of Portlaoise Prison. Brian Stack was shot and died of his injuries in 1984. Thirty years later The IRA finally admitted responsibility for his death in 2013.