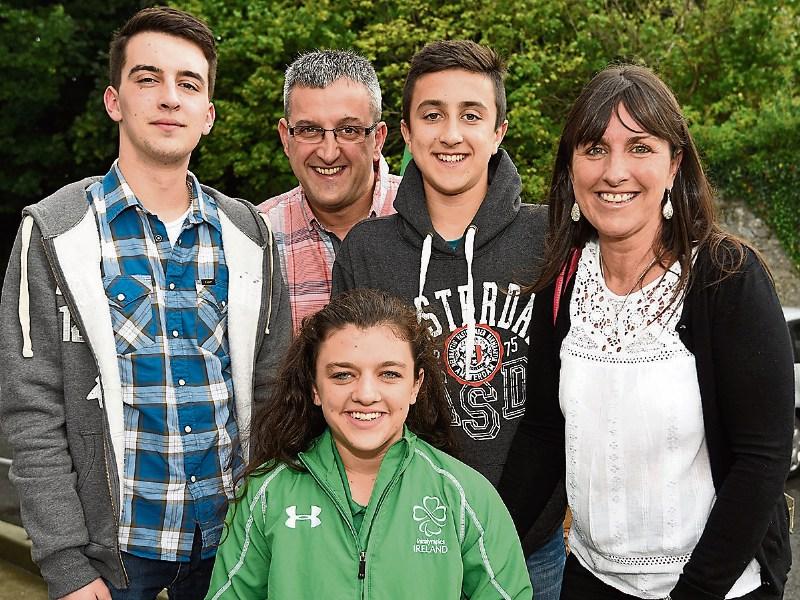 Nicole flew the flag for Ireland and Port in Rio, where she qualified for five swimming finals, recording three new Personal Bests.

Her games were crowned with being given the honour of being the official Irish flag bearer in the closing ceremony.

Her entrance, with parents Bernie and Jason, and brothers Daniel and Ciarán, was heralded with the national anthem and a standing ovation.

Speeches of congratulations came from the Lions Club, the Love Port community group, and the Lord Mayor Joe McAteer who read a poem he composed for Nicole and Port's other Olympic swimmer Shane Ryan.

Nicole was presented with a gold medal for her achievements, from Portarlington Golf Club.

Parish Priest Fr Noonan was as jovial as Santa on the stage, telling "all the boys and girls" how Nicole spent two hours every morning before school training in the pool.

Indeed it was like Christmas for Nicole, who by the end of the event was laden down with baskets of gifts from many local businesses.

"I can't believe all the presents I've got, thank you all for your support for the past few weeks, it's been unbelievable," said the composed young athlete.

Her mother Bernie recalled the support they received from the Little People charity, as Nicole is the only person in the midlands with dwarfism.

"She went to the first dwarf games in Belfast and it was brilliant to meet other little people. She got six golds in athletics and swimming, and at the next ones in 2013, she got an excellent 19 medals," she said, to cheers.

"The next four years are to train for the next Paralympics, and we hope when she does it again she will bring back medals," the proud mother said.

Nicole explained how she kept motivated and balanced her training with school.

"It's quite hard, all I did was swim, eat, school and sleep, hard but manageable," she said.

There was none prouder of Nicole, than her Nana Jenny, who wasn't letting a broken foot stop her from attending the celebrations last Saturday September 24.

"I can't tell you how proud I am. They say you burst with pride, well I burst so many times. Rio was unreal.

“Her papa Peter died two years ago and he always said she'd go to Rio," said Mrs Turner, who lives along with the family in Garryhinch.