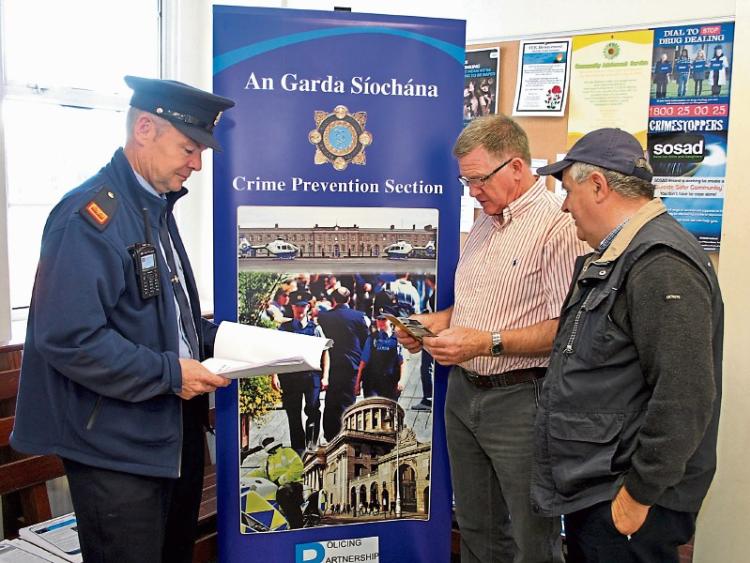 “Ten years ago I never had a lock on the gate. This is the times we live in now,” said a Ballyfin farmer, one of many who came to the Recovered Property morning in Portlaoise Garda Station last Thursday September 22.

He believed he had “no hope” of finding the chainsaw and drill that were stolen from his farm 18 months ago, along with diesel, a total loss of over €1,000.

“I just came in thinking there might be something. It’s terrible you have to look for what is rightly yours. I had to replace them all.

“It’s the thought of them being around your place, that ‘s the biggest problem. They got in the back over the gates and helped themselves, I had everything locked for all the good it did me,” he said.

There is less crime recently he said.

“It has quietened down in the last six months, although a community alert text came round the other day to tell us diesel had been stolen. I can’t understand why they do that when it’s so cheap. I suppose anything they get is 100 percent profit,” he said.

A Cullahill farmer and his wife were hoping to find some of the €5,000 of items stolen from them at night in June 2015.

“They took a car trailer and used it to take a large amount of diesel, a hedge strimmer, a pressure pump, a kango hammer, a chainsaw and plumbing equipment belonging to our son,” the farmer said.

“It felt shocking. They were obviously on the premises for a while to discover the trailer. They left behind a four foot tooth from a rake that could have been for a weapon. Nothing was marked. We should get it done,” he said.

They too held out little hope of recovering their items.

“It’s like looking for a needle in a haystack,” he said.

Patrick O’Connor, a farmer from Castletown, has been hit four times in the past two years, most recently two months ago when a calf dehorning crate was taken.

“They took about €4,000 worth of equipment, including two trailers. It’s terrible. Farmers don’t make a lot of money, and it’s hard earned, to have it taken off you,” he said.

He had brought along his elderly neighbour Joe Morrin, who was hoping to find a cow trailer stolen from him a year ago, worth €2,000.

“It’s terrible disappointing, I paid for the thing and they take it, I’ve sacrificed €2,000,” he said.

Neither farmers had put identifying marks on their property.

Another married couple from Mountrath were both hit by criminals, the man, a forester, has had three chainsaws stolen, while his wife had her car window smashed and her handbag stolen from under the seat, while she was at Mass last year.

“I came out and there was a big hullabaloo at my car. Fr Hennessy rang the Gardaí and I cancelled my cards but within that half hour hundreds was withdrawn from my account,” said the woman, who has learnt the hard way to leave nothing in her car.

“It was upsetting, for a long time I was looking over my shoulder, I felt someone was watching me, because obviously they were that day,” she said.

Portlaoise Garda station was packed all morning with crime victims hoping to recognise their stolen items among folders of photographs , of bikes, tools, jewellery and phones.

Over 1,000 items found around Ireland can be viewed on www.garda.ie Any items left unclaimed are expected to be auctioned in 2017.