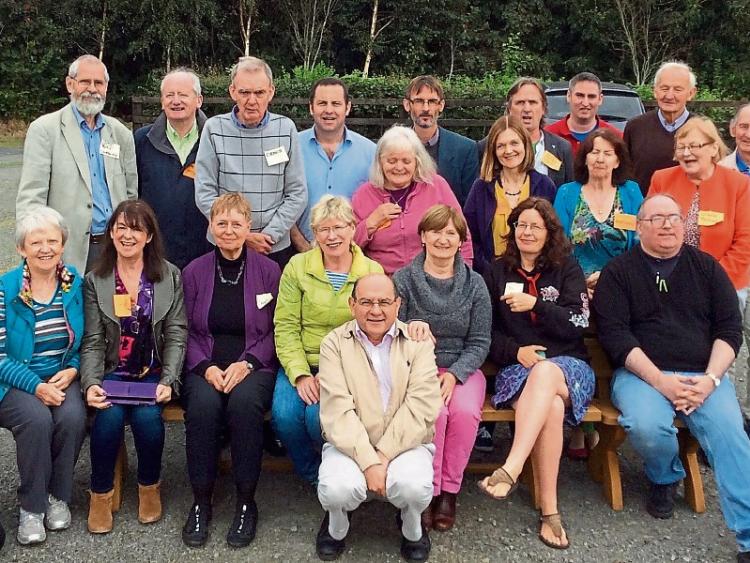 A movement for justice in trading relationships throughout the developing world celebrated its twenty-fifth anniversary last weekend in the location where it had its most important early existence - in county Laois.

Over thirty people from the county and beyond met at The Rambling House in the Rockview Walkways and Resource Centre at Cashel, Ballyroan, to remember the launch of the Irish Fair Trade Network in 1991.

The launch followed over fifteen years of preparatory work by a young Englishman named Richard Leech, who began importing fairly-traded products from around the world and distributing them through a network of local representatives. Two of the earliest were Rosemary Kingston, then living in Portlaoise, and May Fingleton of Cullenagh.

May and her husband Brendan were also involved in the setting up of the Laois Justice and Peace Group and MDA, a development organisation and employment project in Portlaoise to service a number of community projects, including the fair trade concept.

Over the next five years both groups helped to develop the idea on a practical basis, with Richard Leech still operating the distribution system, first from Athlone and then from Newcastle West. Fair traded coffee and bananas were also introduced in the years that followed.

Carol Bergin and later John Daly headed up the executive of the Irish Fair Trade Network, which held a worldwide conference of producers and voilunteers in Kilkenny in 1991.

The gathering at Portlaoise heard that Fairtrade Ireland, as it is now known, has acted as a conduit for over €20 million of Irish Aid funding to producer groups and associated agencies and co-operatives in more than a dozen countries over the past two decades.

Peter Gaynor, the current director of Fair Trade Ireland, heads a team of six at the movement’s Dublin headquarters. He said that Laois should be proud of the role it had played, and continues to play, in delivering respect for the rights of people across to be treated fairly in their business dealings.

“Such respect – for human rights, environment, and nutritional values – makes for a level playing field, in which young people of every race and colour have equal opportunity,” Mr. Gaynor said.