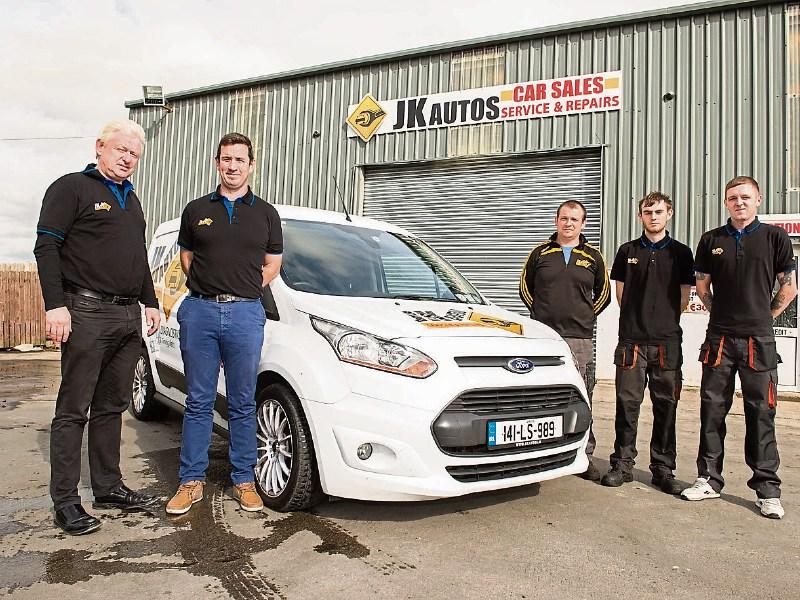 An independent Laois car dealer who was the victim of a €70,000 raid has urged other business and homeowners to have good insurance and take as many security precautions as possible to keep thieves away.

Mr John Kelly, the owner of JK Autos, The Heath, also warned people to be vigilant to anything out of the ordinary as he suspects that drones were used by thieves to case out his business.

Two high spec cars worth close to €50,000 and €20,ooo worth of equipment were stolen from the business near Portlaoise in the early hours of Wednesday, September 28 last. The two cars were a white BMW and Audi 5 coupe. The BMW was recovered but the grey Audi two door was on the market for more than €30,000.

Were it not for having good insurance, John Kelly believes his business would have gone to the wall with the loss of seven jobs.

He lives next door to the garage and is just glad the thieves didn't break into his home.

“It’s not the end of the world. It’s not nice but they didn’t come into the house,” he told the Leinster Express.

While he is trying to take the theft in his stride he knows it has had an impact on his family.

“My wife is not happy in the house. She is eating herself up over it. She’s asking herself a lot of what ifs?,” he said.

His wife is already doubting whether they should continue to live in the house because it's located so close to the business.

“For me to go football training I know she is going to be anxious sitting at home on her home, if she will sit at home alone,” he said.

But Mr Kelly knows that he and his wife and child are not alone. In the wake of the robbery he launched a social media campaign to recover the cars and equipment. The response was overwhelming, both locally and from afar.

“It’s shocking what happened, but the flipside is the amount of people that rang, called out or messaged just to offer to some spanners, diagnostic equipment. Lads that don’t have a whole lot themselves. People that I never knew in the car trade rang me to see if there was anything they could do to help. It restores your faith in humanity,” he said.

The support led to John recovering the stolen BMW which was due to be delivered to its new owner after the raid.

“I got a tip off on Thursday morning. A lad from Dublin rang me who has a garage and was looking on Facebook and saw the car on his way into work,” said John.

The car was later recovered on the Nangor Road, Portarlington. He said the gardai believed it was probably parked up for a few days by the thieves to see if there was a tracking device on it.

He has also got a call from a detective in Galway in relation to the missing Audi.

John and his staff are still assessing how much equipment was taken.

“There is a lot of stuff gone - diagnostics, computers. They knew what they were taking.

“It was all relatively small bits of equipment, but was worth a lot of money. “There is over 80 tyres gone, two sets of brand new alloys missing. They were €1,000 a set.

The gang even took the computer hard drive which stored the CCTV recording.

John suspects that the thieves cased his yard with a drone at night with an infrared camera.

“Two nights after a mysterious noise over the house we got robbed. I don’t think it was a coincidence. They were organised - they knew where everything was,” he said.

He has learned some harsh lessons

“I would have thought we were very secure because there are two street lights right outside. The gates are well locked. I have security, CCTV and a rotweiller in the yard and the garage is right beside the house. But maybe I gave myself a false sense of security,” he said.

Apart from urging people not to put security measures on the long finger, he pleaded with others to have good insurance.

“Everything that the insurers were charging me for was for a reason and I was covered. Had I not been covered and I was to try and replace that €70,000 there would be seven people including myself out of a job. No question,” he said.

Mr Kelly repeated that he and his family and staff are very thankful for all the suPport.

“What doesn't kill you makes you stronger,” he said.