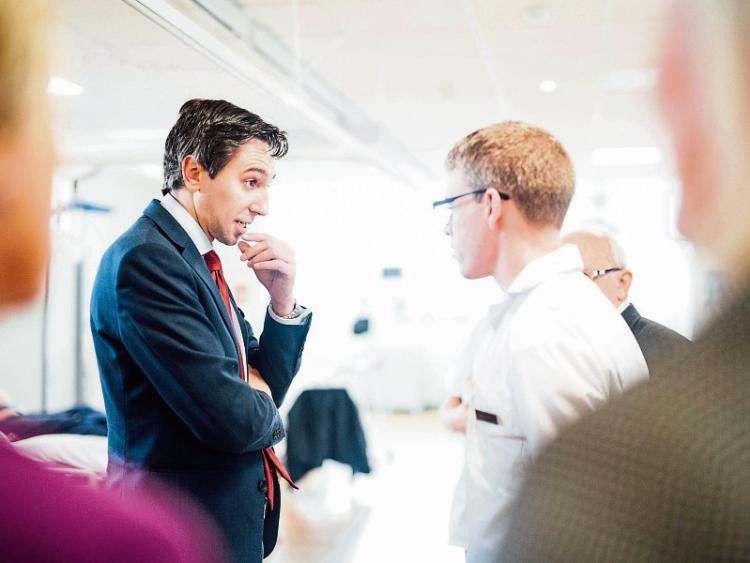 A national newspaper has asked if the Minister for Health Simon Harris will show some backbone and implement a plan which would see the downgrade of Portlaoise hospital.

“Is it a case of one rule for John Halligan and another for Charlie Flanagan” headlined the article.

The paper says that when the “spat erupted” over cardiac services at University Hospital Waterford, Minister for Health Simon Harris stressed he would be guided by expert clinical opinion.

A review from an independent expert Dr Niall Herity, who recommended against a second cath lab in Waterford. Consultants working in Waterford and the clinical director of the hospital group in the south have said this is the wrong call.

The Sunday Business Post says the Minister stood by the findings.

“Harris said he would be “guided by independent clinical advice He has stood over the Herity report and its recommendations despite coming under huge pressure from his Cabinet colleague John Halligan.

Halligan is a Waterford TD and member of the Independent Alliance. Halligan threatened to pull his support from the government, but the government held firm”.

The article contrast the outcome for Halligan and Waterford with Portlaoise and Minster Flanagan.

“It will be interesting to see what Harris will do with proposals that concern the home turf of his Fine Gael party colleague, Minister for Foreign Affairs Charlie Flanagan.

“In June, the Dublin Midlands Hospital Group submitted a plan to the Department of Health that proposed replacing the emergency department at Portlaoise Hospital with a minor injuries unit.

“The plan for the hospital also proposed removing maternity care and paediatric services from Portlaoise Hospital”.

The Sunday Business Post points out that senior clinicians at the Dublin Midlands Hospital Group – which includes hospitals in Tallaght, Tullamore, Naas as well as St James’s Hospital in Dublin – “believe this is the right move”.

“They believe it will ensure patients are given better care in the right facility. National clinical leads across the health service support this plan”.

However the article points out that it is “ominous” that nothing has happented since.

“Will it be a case of one rule for Halligan and a different one for Flanagan?”

The article points out that Hiqa (Health Information and Quality Authority) published a major investigation into Portlaoise last year following the deaths of a number of babies at the hospital. It says this comprehensive review highlighted the low volumes of complex patients as a key concern.

“Hiqa’s report was highly critical of the failure to resource the level of services provided in the hospital, including its 24-hour emergency care.

“Emergency department staff need to be able to access specialists in relevant specialities, including critical care, coronary care, as well as trauma and orthopaedic care to provide optimum treatment. This is not available at Portlaoise.”

“Portlaoise Hospital was one of ten hospitals chosen by the HSE to have their 24/7 emergency departments downgraded in 2011.

“Health sources said there was significant political interference by the last government, with the HSE forced to remove the hospital from the list.

“And yet, here we are in 2016 and the hospital is still trying to provide a 24/7 emergency department.

Politicians are reacting as follows.

The article concludes by drawing parallels with Waterford.

“O’Rourke asked Deasy whether he supported the report on cardiac services that was carried out by Dr Niall Herity.

“You accept the review?” asked O’Rourke.

“How could you not?” Deasy replied.

“Will Harris show the same backbone when it comes to Portlaoise? Or will this plan simply be kicked to touch?”