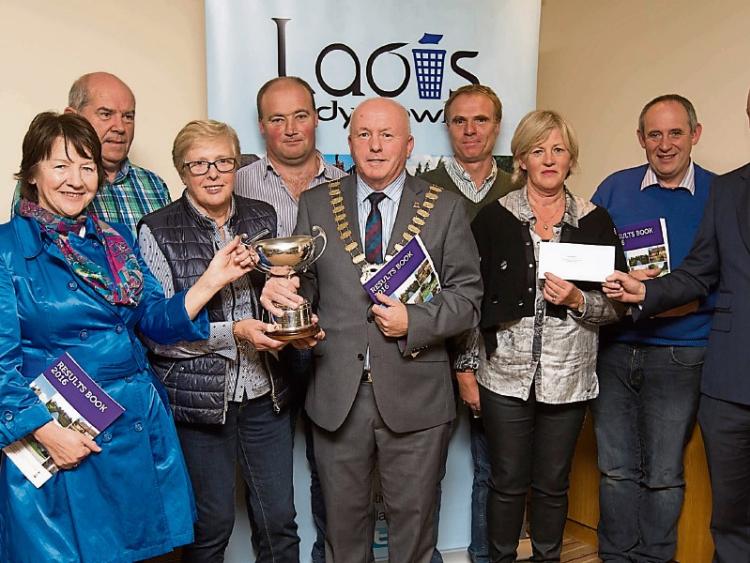 Cullohill has come out on top in the annual Laois Tidy Towns awards.

Alongside the overall winner award the south Laois village took the top spot overall, while it also took the award for communities that have populations of less than 100.

First in the population Category 200 – 1,000 was the everygreen Castletown Tidy Towns Committee.

Fresh from the Gold Medal in the National Tidy Towns Awards, the committee in Abbeyleix enjoyed more success taking the number one spot in the 1,000-2,000 population category

Portlaoise also enjoyed sucess in the National Awards taking a silver medal and was again successful coming first in Laois for population Category of 2,000.

A special merit award was also announced on the night by Donal Brennan, Director of Services.

Emo Tidy Towns won this award for their work on promoting biodiversity with the National Biodiversity Data Centre.

Cathaoirleach Tom Mulhall congratulated the 21 tidy towns committees from across the county that gathered in the Maldron Hotel to find out who took the local honours in this year’s Laois Federation of Tidy Towns.

Speaking at the Awards, Cathaoirleach Mulhall welcomed the return of the local competition, which recognises the importance of the work undertaken by local groups on a voluntary basis.

A warm welcome was extended to Eileen Canny, the independent judge for the awards and each committee was presented with a results book which provided feedback on the judged categories, as well as providing general comments and suggestions for improvement.

Noreen Byrne, Chair of the Laois Federation also complemented all the groups on their hard work throughout the year and encouraged them to consider the constructive comments provided by Eileen.

Groups were also provided with information on the new Green Dog Walker campaign as well as getting their photographs taken to help promote Reuse Month (which is running in October).