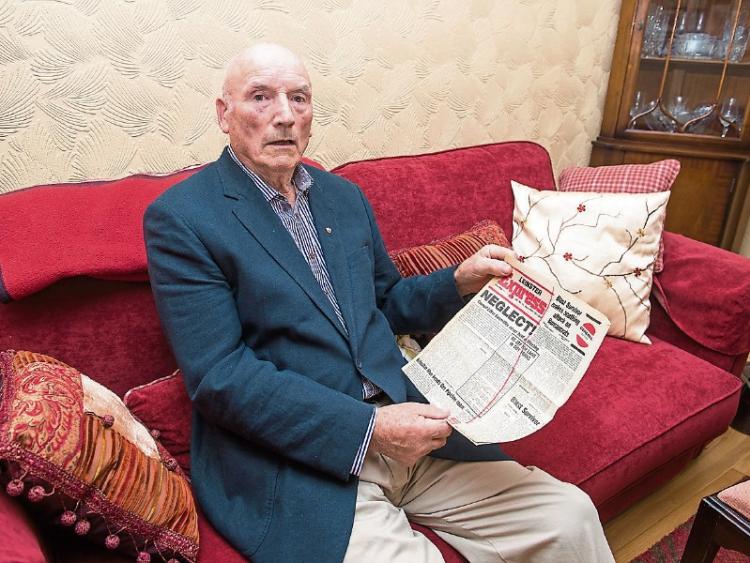 Forty years is a long time for some but it may as well be yesterday for retired Garda Sergeant, Jim Cannon.

He tells the story of the horrific IRA bombing that killed one garda and injured four others as if the memory of October 16, 1976 is permanently etched in his mind.

“The memories will never fade. We had a meeting about the Mass. Supt Joe Prendergast and the gardaí in Portlaoise are arranging the Mass. We had a bit of a chat and I told him it was the same as if it happened yesterday, ” said Jim.

The retired sergeant still lives in Portarlington just a few miles from where he almost lost his life after being caught in a booby trap bomb, planted by the IRA.

“There was a phonecall to Portlaoise Garda station. It said suspicious activity was taking place in Galvin’s vacant house in Garryhinch. The Emergency Powers Act was to be signed that day or night and they mentioned that there was a threat on the life of Oliver J Flanagan. I got a phonecall, I was sergeant in charge at Portarlington,” Jim told the Leinster Express.

The official record shows that a woman warned that an IRA gang were holed up in a vacant farmhouse ahead of an attack on the Fine Gael TD. Jim immediately organised his colleagues to go to the scene to investigate.

“Gerry Boyhan, Michael Clerkin and myself were in the patrol car. We got a message from Portlaoise to await the detective branch members. So at about 11.40am on October 15th Tom Peters and Ben Thorton, the two detectives arrived in their police car to the square in Portarlington where we joined them. We drove to Garryhinch.

When they arrived at the house, which was down a boreen, it was in complete darkness.

“One of the windows at the back door was open. Michael Clerkin went in the window. The next thing was, after a couple of seconds, the whole house went up.

“Gerry Boyhan and myself were trapped at the back wall under six feet of rubble. Stones blown up into the sky were falling down on top of us. I got a few in the face and head. We were trapped.”

When the dust settled Garda Boyhan was able to move.

“Gerry was able to release himself after some time. Then he tried to get me out but failed. There was too much stuff over my body. So he went off looking for assistance from the neighbours. At that stage my left hand, leg and ankle were all covered. I tried to remove some of the stuff with my right hand. I got out eventually and went around to the front of the house,” he said.

There was no visible sign of Tom or Ben, recalled Jim.

“I heard moaning but there was no sign of anybody. But I was able to pinpoint where it was coming from and it was Tom Peters. I removed all the debris and stones off his head so that he could breathe. In fact I couldn’t see a face, his head was butchered.

“So then I heard more moaning towards the centre of the rubble which could have been up to eight feet high.

“At that stage the local people had arrived. First they tried to get out Tom Peters - they had an awful lot of stuff to get off him. I was able to direct them to where the moaning was in the centre of the rubble. They started shoveling off the rubble but had to be very careful.

“Eventually they got down and we saw a white coat that Ben was wearing. He was face down and a beam was across his head. He was able to breath in a little pocket of air under the beam. He was an hour in that position under the rubble. They got Ben out but he was very badly shaken - he was nearly at the end,” he said.

“On the way into Portlaoise hospital in the ambulance I was looking down at Tom Peters and I couldn’t believe what I was looking at, it was horrific.

“Gerry Boyhan’s face was all broken up. Ben Thorton got a fierce going over. My ankle up to this day, 40 years on, is still throbbing. My left leg and back suffered lifelong injuries. Up to this day I am taking medicine. The others the same. No one ever recovered.

“I didn’t go back on duty for some months after. I wasn’t able to walk. I was going around the house for around six weeks after on my knees - I had no power in my legs. It was miraculous what I was able to do on the night. Had I not come out of the rubble there was no doubt about it but Tom Peters and Ben Thorton wouldn’t be alive. When you have people with shovels and pick axes and so on - they would not know where to look if I wasn’t able to pinpoint where the rubble was coming from.

“It was a miracle that we weren’t all killed. Garda Clerkin was killed instantly. At the inquest later in Tullamore he was only identified by his signet ring. Michael Clerkin was only 24. His mother had cancer at the time and died three months later,” said Tom.

Nobody has ever been charged arising from the bombing. Jim says a suspect in Portarlington was arrested, but was released. Another suspect was supposed to have gone to Dublin.

“They did investigate it as best they could but it was a question of the evidence,” he said.

However, Jim knows he and his colleagues fell victim to a 100lb bomb. He has no doubts but that the IRA were behind it.

“It is obvious it was an IRA attack and, of course, like everything else they deny everything,” he says.

He has come to terms, somewhat, with the fact that there is little chance of bringing to justice those responsible, but Jim is adamant that the State did not look after the four men who were victims.

He says the compensation was “a joke” but this is worsened by the fact that the Garda top brass have never recognised the sacrifice and bravery involved.

Tom Peters unveiled a plaque to Michael Clerkin at Portarlington Garda Station in 2001. He let the powers that be who were there know that Garda Clerkin's family should at least be given a posthumous Scott Medal for bravery.

“As Tom Peters said at the time, some self-centred people in a position of authority at that time chose to ignore that courage and bravery,” he said.

Of the four members who survived retired detective Peters never worked again. He was disfigured. Despite surgery both here and abroad he was left blind and totally deaf. He lives in Portlaoise.

Jim Cannon suffered injuries to his head, back, hands eyes and both his legs and continues to receive medical attention. To this day he lives with constant pain in his legs back and head. He retired in 1994 and lives in Portarlington. He was the Laois Offaly branch secretary of the Association of Sergeants and Inspectors. Jim returned to indoor duties in January 1977 but never returned to outdoor duties.

Retired detecitve Thorton, who lives in Portlaoise, sustained injuries to his head, ears and eyes. He retired from the force in 1999.

Retired garda Gerard Boyhan received serious injuries to his head, face, eyes and chest. He moved to Roscommon and has since retired in Longford.

Jim Cannon says the damage went beyond the injuries.

“Not alone our careers but our families were devastated. It was very serious for the families,” he said.

“There was no such thing as post traumatic stress disorder but, of course, we had it. Nowadays people in trauma get looked after, we got nothing.

“We are living with the trauma for the last 40 years. Everybody is still getting medical attention. I have trapped nerves in my leg, ankles are still throbbing, I have back problems and got a bang in the head. I had to work through the pain barrier,” he says.

Nothing has happened since Tom Peters made his appeal for the Scott bravery medal. Some 15 years later Jim believes the State still owes all four men and their families, especially the worst injured of the surviors.

“If Tom Peters had a medal in his hand it would mean something. He can’t see or hear but if he had a medal - of course it is not too late yet - if they do the decent thing and award the Scott Medal,” he said.