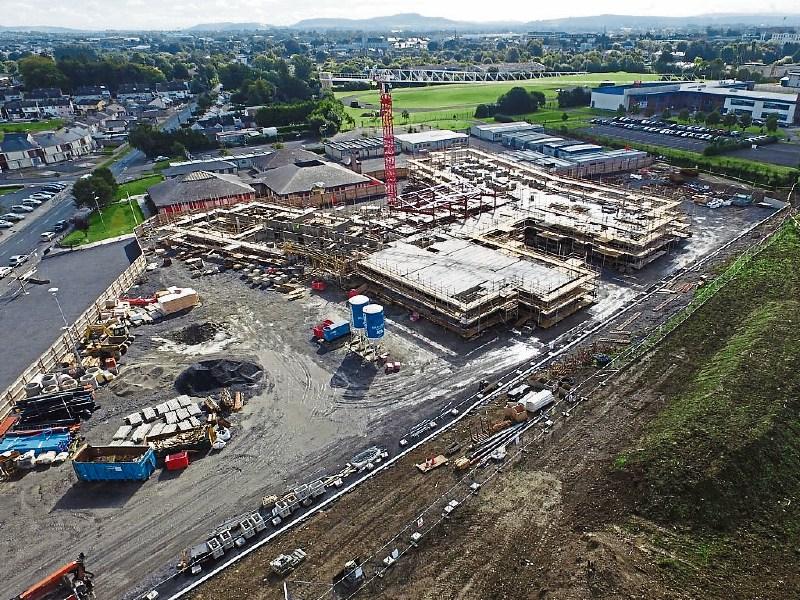 Money from Europe is being used to build a new home for Scoil Bhríde national school in Portlaoise.

The Minister for Education and Skills, Mr Richard Bruton, signed a long term loan agreement which will allow the Department of Education to draw down €200m in European Investment Bank funding for 71 schools in Ireland.

Construction work began in January on new 32 classroom school in Knockmay. It is expected to be completed by June 2017. Clancy Construction from Co. Tipperary are the builders.

The new building is being built on the site of the existing school but none of the old structures will remain. Scoil Bhride, which has DEIS school status, has grown heavily reliant on prefabs.

Ironically, the first phase of building included the installation of the 6 new prefabs at the back of the school as the junior Infant wing had to be demolished.

Scoil Bhride is one of the biggest schools in Laois. It is a mixed school of 755 pupils which has 49 teachers with 7 Special Needs Assistants, as well as other staff.

Its construction is part of a major school building programme in Portlaoise.

Two new junior and senior Parish schools are also being built. The Holy Family Junior and Senior Schools are expected to move to their new homes next year.

A new school is also set to be built to replace St Francis School for children with special needs.

When it is built it will bring 10 the number of new primary and secondary schools to open in Portlaoise in the past decade.

The EIB is the EU's long-term lender and is owned by its member states.