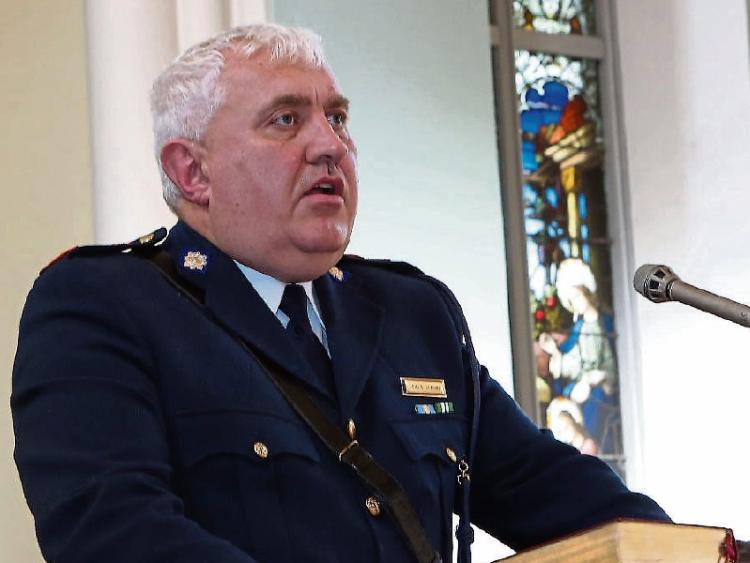 Eulogy delivered by Laois Offaly Garda Chief Supt John Scanlon at the 40th Anniversary Mass in St Michael's Church Portarlington for the late Michael Clerkin who died in an IRA bombing on the Laois Offaly border on October 16 1976.

This mass marks the remembrance of the events of the 16th of October, 1976, when five members of An Garda Síochána, Sergeant Jim Cannon, Garda Michal Clerkin, Garda Gerry Bohan of Portarlington, with Detective Garda Ben Thornton and Detective Garda Tom Peters responded to a anonymous call that a number of armed men were at a disused farm house and that these men would attempt to murder the then Fine Gael Minister Oliver J Flanagan.

Having planned the search these members courageously went to this farm house to search and confront this gang. What unfolded was the luring of these men to house that had been booby trapped with a bomb.

The death of Garda Michael Clerkin and grievous wounding of the other members that attended puts these events among the darkest days of An Garda Síochána. These events should never be forgotten. Garda Clerkin was 24 years of age when these events took place.

From a historical prospective some 200 people had been killed in the Northern Troubles. Garda Michael Renoylds had recently been murdered, the British Ambassador, and a Civil Servant, Ms Judith Cook, who was accompanying the Ambassador was also killed in Dublin.

On the night of 16th of October an hour before the events at Garryhinch, president of Ireland had signed the Emergency Powers Act into Law, against this backdrop Garda Clerkin and his colleagues made their way to Garryhinch.

Whereas some people will forget these events, for others it will not be possible to forget, the scars of injury and suffering of the families is everlasting.

On my own behalf and on behalf of the men and women of An Garda Síochána, I want to bare testimony to the men on that night and to ensure them that their deeds of bravery and their sacrifices will not be forgotten.

My thoughts in particular on this day are with the families of the late Garda Clerkin and of the former Detective Garda Peters who suffered horrendous injuries on the night and is unable to be with us here today.

In the past number of months I have discussed this case with the Garda Commissioner and I have prepared a submission for the award of Scott Medals to be considered for all of the members present at Garryhinch on the night.

I also want to place on record my gratitude and that of An Garda Siochana to the local people of the area who made their way to the house on that night, who with their bare hands assisted the Gardaí (our colleagues) on the night in digging the survivors from the rubble.

An Garda Síochána is one of the few professions in Ireland where there is a risk that those who go to work will not return to their families and loved ones.

My thoughts on this day also are with Garda Michael Clerkin's girlfriend of that time, Betty Cooper, the members of the other emergency services who attended and all of the members of An Garda Siochana who were serving on that night and stationed in the Portlaoise District at that time.

It is now clear, with the benefit of hindsight, that Garda Clerkin did not die in vain, and that his sacrifice has ensured that the peace we enjoy today will be part of his legacy and that the proud tradition of An Garda Síochána and an unarmed policing service. His memory will not be forgotten.