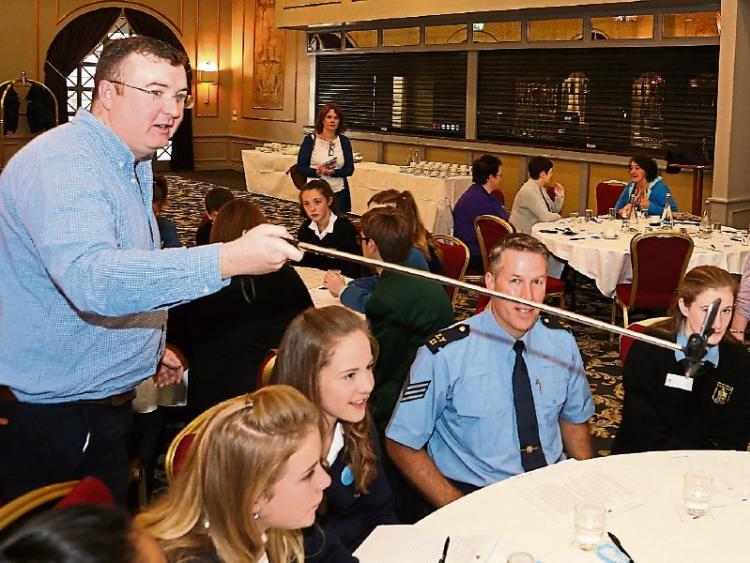 Laois briefly became a republic last Wednesday October 19, when 110 teens at the Comhairle na nÓg AGM formed new political parties and worked out a budget for their hypothetical new state.

The annual 'think-in' at the Comhairle AGM was attended by teens from clubs and all Laois secondary school except Heywood CS which had another committment on the day.

The students split into groups, mixing schools, and after getting to know each other and choosing a party name, had animated discussions on how each would budget a Republic of Laois.

The Laois Youth Communication Party put half of their money into health, safety & wellbeing, over education, transport or tourism.

“We feel mental and physical health is very important to young people. It should really be looked at,” said a spokesperson, to applause.

The 'Laois Young Independents' also put health first because of “mental health and people on trollies“.

In a final vote however, education concerns narrowly won out, and will now be the focus of the new committee.

That committee of 25 is already formed.

Last year their focus was on 'safe spaces' for teens, and the fruit of their hard work is a new booklet listing every club and venue in Laois, with 3,000 copies printed.

“We found that 59 percent of people felt unsafe in Portlaoise town park, a shocking statistic thatwe presented to the council who will now make further developments,” she said.

Hannah Johnson from Mountrath CS was stepping down to concentrate on her studies, and gave an emotional farewell speech.

“I was 12 and shy when I joined Comhairle, now I'm 16 and I transformed into a strong independent young woman,” she said.

“Laois has a fantastic Comhairle. They are one of the few to meet every week, even during summer, so they probably produced more than a lot of other comhairles. Because of that Laois County Council now engages with them on every public consultation,” said Laois Comhairle co-ordinator Elaine Boyle, from YWIL

Georgina Ireland is the council's co-ordinator.

“Today is about listening to young people's concerns, and forming a mandate for the year ahead. We are very pleased with the turnout” she said.

The Dept of Children and Youth Affairs gives each of the 31 Comhairles an annual budget of €20,000, and holds a national Dáil na nÓg.