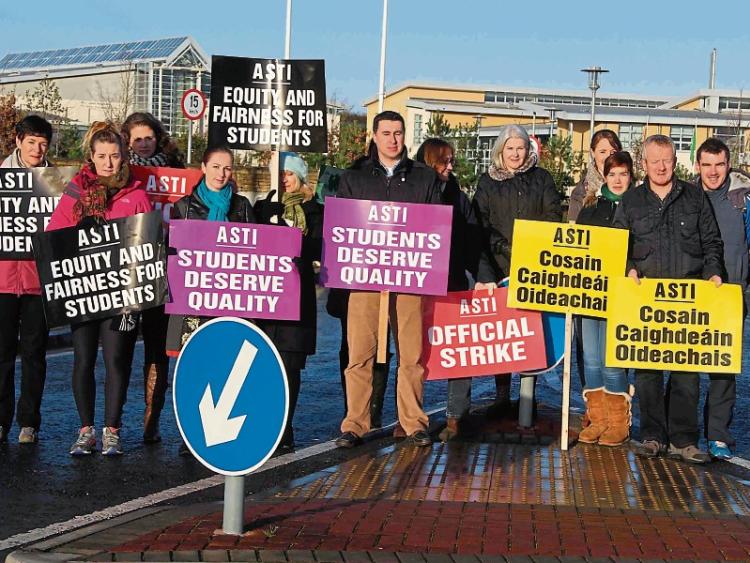 Thousands of Laois pupils will loose a day of education this week as around 250 secondary school teachers take to the picket line in their battle with the Government to get equal pay for younger teachers.

Community schools in Heywood, Mountrath and Mountmellick look set to close as will Scoil Chríost Rí and St Mary's CBS in Portlaoise shut their doors. Coláiste Iosagáin will close while Laois students attending Knockbeg College will also be off this Thursday.

Mr Dennehy said the decision was taken this Spring to take industrial action because of the unfairness of salaries paid to newly qualified teachers.

“We regret very much having to take this drastic action. It has been flagged for an awful long time,” he said.

“It has short term ill effects but in the long term equality and fairness has to be established for new recruits to the education system.

“In the long term we will be doing the education system a favour because we will be trying to ensure that standards are kept high. Pay and conditions are part of that,” he said.

He 'trusted' that parents would speak their minds on the dispute but he had received no negative reaction from them to date.

“I imagine that they know by now the reason behind the strike. Some of those parents who would aspire for their children to go into education or get a job in the public service would like their children to have equality of pay,” he said.

He said pupils and teachers have lost out an awful lot due to cuts such as bigger class sizes and abolition of guidance counselling.

Mr Dennehy said he had met Laois' Government Minister Charlie Flanagan and urged him to take a message to the Taoiseach and the rest of the Government.

“The guiding principle in any democracy should be equality and fairness and there is a bit of that missing. That is the message. Equality how can you stand against,” he said.

Mr Dennehy said he had been heartened by the response of all teachers to the newly qualified of lesser paid teachers.

“There is nothing in this for me. I am a senior teacher. I do believe that everybody that I work with should be treated equally and I hope that the Ministers will condiser that when they sit around the table,” he said.

He added that there are many underpaid younger teachers around the country but that Laois may have a high proportion because of the number of new schools and growing population of recent years.

Portlaoise College, St Fergal's Rathdowney, and Clonaslee College will not close because their staff are TUI members who are not on strike.