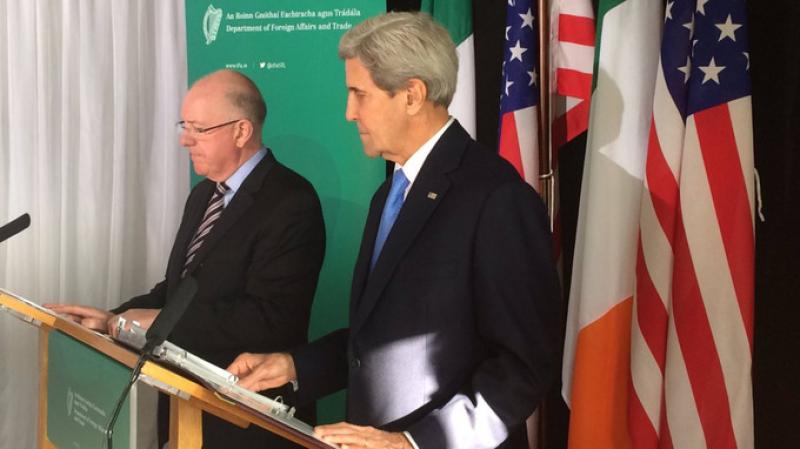 Laois TD and Minister for Foreign Affairs & Trade, Charlie Flanagan held a landmark meeting with one of America's most powerful politicians.

The Fine Gael TD met with US Secretary of State, John Kerry in Tipperary where the former US Presidential candidate won the Tipperary International Peace Award.

“Secretary Kerry has an outstanding record of public service going back three decades and more. His record is one of distinguished service at state, national and international leveln" said Minister Flanagan.

The Laois TD said a number of issues were addressed.

“I updated Secretary Kerry on the most recent developments in the Northern Ireland Peace Process, which is an important priority for the Government. I availed of the opportunity to thank the Secretary of State for his personal commitment to the process of peace and reconciliation on this island.

“Turning to European issues, we discussed the United Kingdom’s intended withdrawal from the European Union. Ireland will continue to work closely with our EU partners and the UK in this regard. Ireland remains committed members of the EU, and we want as close a relationship as possible between the UK and the EU in the future," he said.

They also discussed immigration reform which affects many Irish people in the United States.

"As a former Senator for Massachusetts, Secretary Kerry is aware of the problems faced by undocumented Irish citizens, including being unable to attend important family occasions. Secretary Kerry does not have a direct role on immigration reform, but the Government avails of any all opportunities to raise the issue with the US authorities," said the Portlaoise-based Minister.

They also discussed a number of international issues, notably the appalling situation in Syria.