Superstar Zach Tuohy is still 'one of our own' in Portlaoise 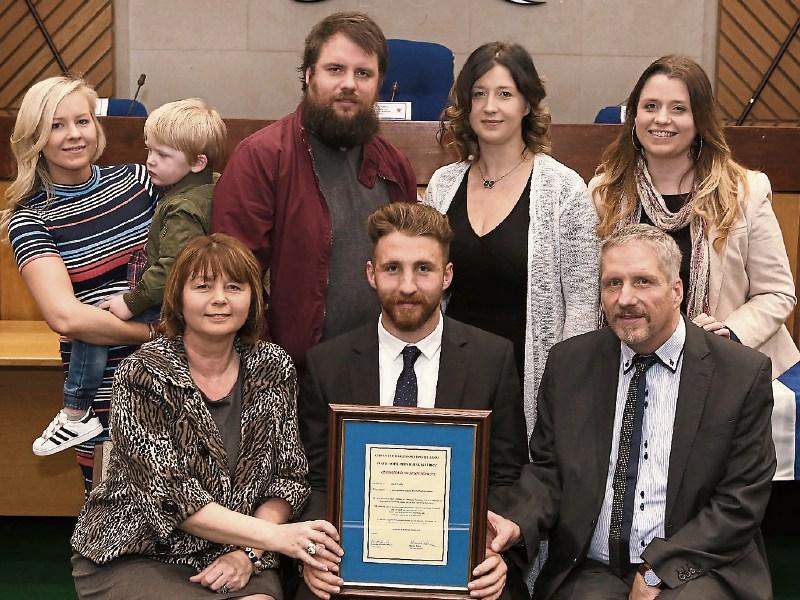 IN Australia he’s a sports superstar. In Portlaoise he’s “one of our own”—albeit one of whom everybody is very proud.

As was evident last Thursday evening when the Council chamber in County Hall was packed for a civic reception accorded to footballer Zach Tuohy.

Even “enemies” were there - Laois County Council Chairman Tom Mulhall, a former Emo player, and Director of Services Kieran Kehoe, an O’Dempsey’s man.

Present, too, were past and present footballers and leading the Portlaoise Club contingent was its octogenarian President Dick Sides.

The Tuohy family was there in strength. People who mentored Zach were in attendance, people like School Principal Des Sutton and Club stalwarts Vincent Dowling and Peter O’Neill.

Portlaoise Municipal District Chairman Cllr John Joe Fennelly presented a certificate of civic achievement to Zach—the first ever such cert to be awarded by a Laois municipal district. So history was made.

Quipped Zach: “I could happily sit here all night listening to people saying own great a man I am.” Among his listeners were his partner Rebecca and son Flynn.

Much of the talk at the reception was of the stunning goal Zach scored for Laois minors against Derry in 2007. Seemingly, it is ranked 15 of the 50 best goals scored in Croke Park—and the sole one from a minor.

Playing football since the age of seven, he holds nine Laois senior football medals, five won before he was 22. He holds county medals at all grades. Down under, adapting to aussie-rules, he made 100 appearances for Carlton and was elevated to the All-Australia team, the equivalent of our All-Stars. He recently transferred for an impressive fee to the Geelong Club.

Zach, reared at Summerhill within a short distance of the new Portlaoise GAA grounds in Rathleague, is a son of Noel (a County Councillor) and Mary Tuohy. He has a brother, Noel-John, and two sisters, Hannah and Naoimi.

At the reception were his aunts Angela, June, Cathy and Margaret, uncles Frank, James and Michael; cousin Ann; and aunt-in-law Claire.

Portlaoise Club Secretary Pat Leogue was there, as was Treasurer J P Cahillane, and activists like Ollie Byrne, Tom Keogh and Liam Breen.

Coach Malachy McNulty, accompanied by his father also name Malachy, seemed to have got over the disappointment of the County Final defeat and Bruno McCormack was back in good form after his injury in that match.

Among the veterans present were Jazz Reilly from the great 1964 Town team and Colm Browne who captained Laois to victory in the 1986 National League final.