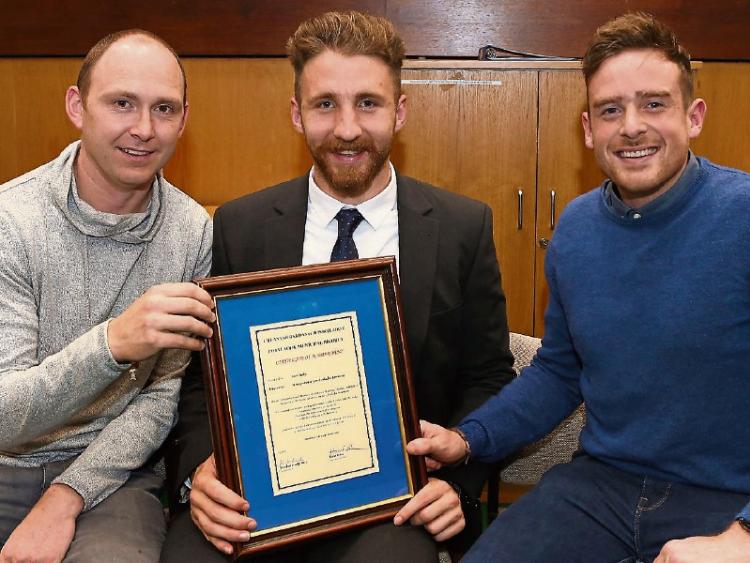 “A fantastic role model for players. A very modest guy.” The description of Zach Tuohy by Portlaoise GAA Club Chairman John Hanniffy at the civic reception in County Hall.

He told the gathering: “I’m delighted to be here to celebrate this unique honour for Zach. The first time I saw him I knew he was a gifted sportsman.

John added: “It’s very important that people who do go abroad remember where they come from. It’s great to have a person who reflects well on us as a club, town and community.”

He told Zach: “I am sure that your success will inspire and encourage others to participate in football in county Laois and on Australian soil.”

Cllr Fennelly went on: “I would like to take this opportunity to acknowledge your mentors in both Portlaoise GAA and in the AFL, and indeed all those who have supported you during your development and helped you in achieving your goals.”

He concluded: “I would like sincerely to congratulate you on your success and I wish you every success into the future and in particular with your new contract with Geelong Football Club.”

County Council Chairman Tom Mulhall, noting that he was an Emo man, hoped that those at the reception wouldn’t hold it against him. And he hoped Zach would play a year or two with Laois footballers “when he comes back.”

Director of Services Kieran Kehoe recalled Zach’s “rasper” against Derry in 2007—the TG4 goal of the year. He mused: “That team was managed by an O’Dempsey’s man.”

He said everybody spoke of how helpful Zach was to people who travelled to Australia from Ireland.

Zach, in reply, attributed most of Portlaoise’s football success to “people in the backroom.” He explained: “It was always more of a family to me. If it wasn’t for people like that I would not be in the position that I am.”

He thanked everybody who’d encouraged his career, including his partner, parents, family and friends.