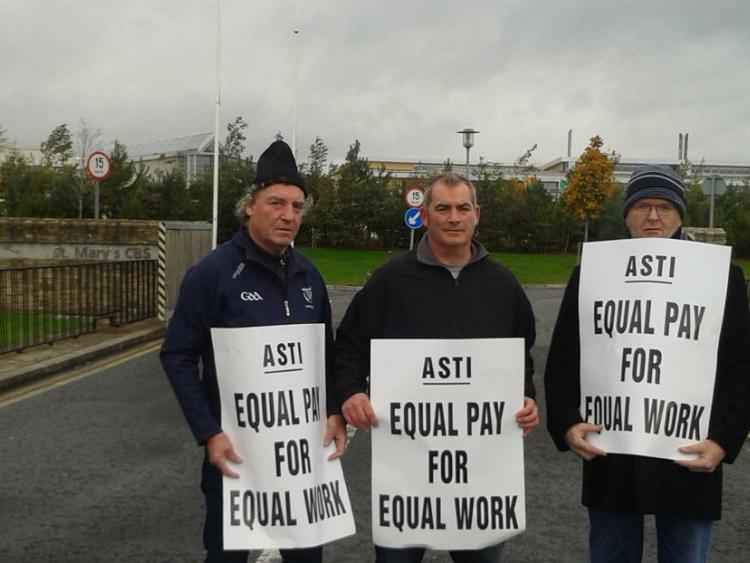 Teachers on the picket line at Scoil Chríost Rí and St Mary's CBS in Portlaoise in October.

Nearly 1,000 girls will not be at school in Scoil Chríost Rí as a result of teachers dispute over pay for supervision

Scoil Chríost Rí secondary school for girls in Portlaoise will not open if the teachers dispute over supervision and substitution proceeds.

The Chairperson of the school's board of management has written to parents this week that it wishes to keep the school open during the ASTI withdrawal of supervision and substitution. Nearly 1,000 girls attend the school.

"While the board of management wishes to keep the school open (on Monday, November 7) it is not, regrettably, possible to re-open the school after the mid-term break until appropriate health and safety and child protection provisions can be established,"  writes Mr Herbie Wilkins in the letter which arrived to parents on Friday, November 4.

"Due to this action the Board of Management will not be in a position to ensure safety of the pupils in its care from that date. Health and Safety legislation, the loco parentis principle and insurance requirements place a duty of care on school management to ensure the safety, health and welfare of pupils," he outlines.

The letter says that the board believes that teachers are best placed to undertake supervision and substitution. While the school has engaged with the Department of Education on alternative arrangements and the teachers union as said it will not impede such alternatives, ASTI has not indicated that it will fully co-operate.

"Even if there were to be full co-operation by the ASTI with a contingency plan, the deadline of November 7 is unrealistic as it does not allow sufficient time to put supervisors in place," said the letter.

"While the board wishes to keep the school open it is not, regrettably, possible to re-open the school after mid-term break until appropriate health and safety and child protection provisions can be established," read the letter.

Mr Wilkins concluded that the board would keep the situation under review and keep parents notified of relevant developments.

Management of Scoil Chríost Rí's neighbour school St Mary's CBS for boys has already announced that it will not re-open if the dispute proceeds.

Nearly 2,000 pupils attend both schools. The Laois town's third school, Portlaoise College is not affected as its teachers are members of the Teachers Union of Ireland who are not in dispute.