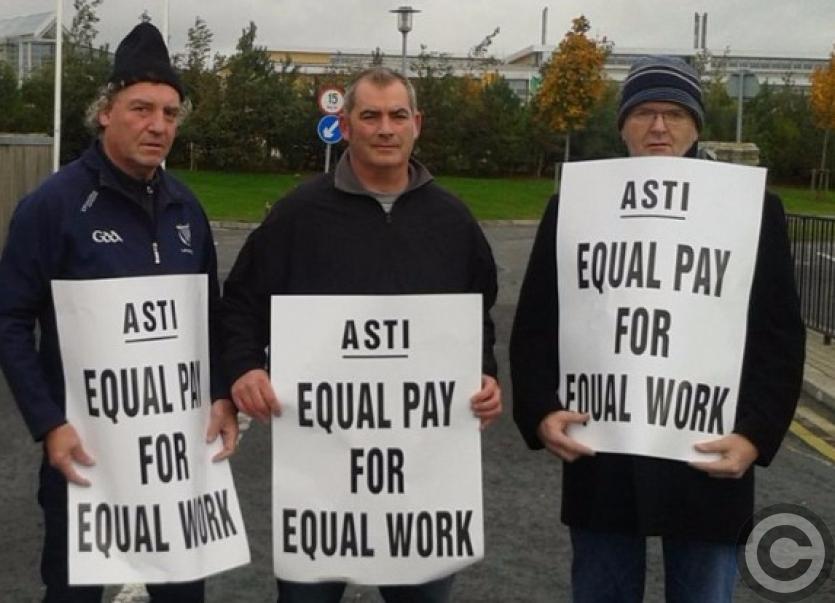 Teachers on the picket line at Scoil Chríost Rí and St Mary's CBS in Portlaoise in October.

Thousands of students have been forced to stay at home in Laois after talks between the Association of Secondary School Teachers in Ireland and the Department of Education ended on Sunday night without a breakthrough.

Teachers went work tomorrow but boards of management decided last week that they could not open if the dispute went ahead as they would not be able to replace teachers with others who could supervise students on health and safety grounds.

If no breakthrough is achieved on Monday the schools will certainly close on Tuesday as the teachers will be on strike. The schools may stay shut after Wednesday as the boards of management are unlikely to find replacement supervisors.

Laois ASTI representative Mr Eamon Dennehy is a parent himself and told the Leinster Express last week that he could "absolutely see" that parents would be frustrated however teachers must stand up for their rights.

Talks have been taking place in an attempt to resolve the union's dispute over pay for supervision duties and equal pay for more recently qualified teachers.

The ASTI said the withdrawal from supervision and substitution will go ahead despite its participation in talks. The union said that no progress has been made on key issues.

In a statement, the Department of Education said that it has communicated on multiple occasions, and reiterated that there is "a deal on the table, including immediate payment for supervision and substitution, a 15-22% increase in pay for newly qualified teachers and quicker access to permanent, full-time jobs for newer teachers".

Minister for Education and Skills Richard Bruton said the dispute will cause huge disruption.

Portlaoise College, Clonaslee College and St Fergal's College Rathdowney are not affected as their teachers are not ASTI members.