Comment: Sickening back down on Dáil hospital protest by Laois councillors 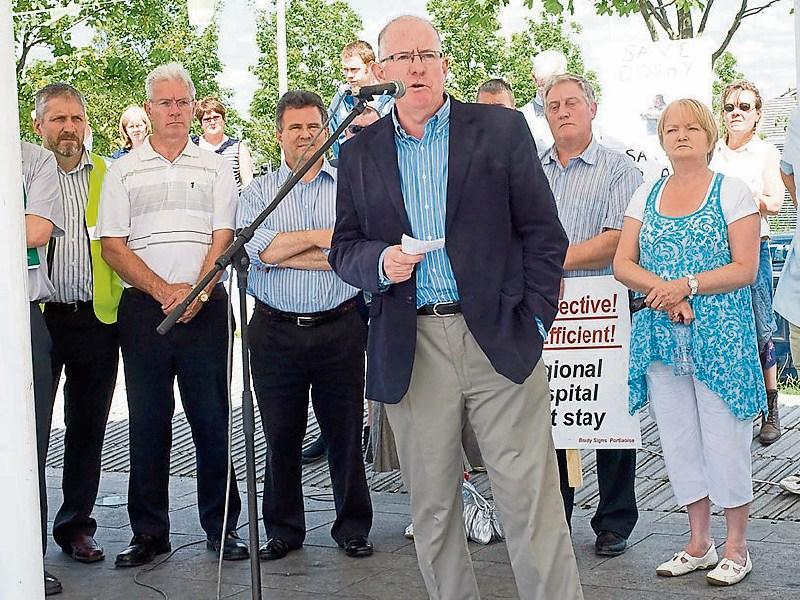 Like him, loathe him or disagree with what he said on a lot of things, Donald Trump won because he reflected the anger of many Americans left behind or ignored by the political elite. He stood up for the masses.

Politicians around the world should take note.

All politics is local and Trump in many ways made local peple national.

Last week Laois politicans had a chance to nationalise a local issue. They had a chance to stand out from the crowd of 'doff the hat' 'pothole councillors' and make a stand on a life and death issue - Midlands Regional Hospital Portlaoise.

Last month, 19 Laois county councillors agreed to go to Dublin to protest against a downgrade of the hospital.

They were due to travel last Wednesday as one in solidarity with the hospital and the 80,000 people in Laois who may use this facility during their lives.

Talk is cheap and action speaks louder than words.

Before they were due to travel Minister for Health Simon Harris said he would not meet them or Laois TDs before a plan was complete.

In fairness, the Minister has said this many times so the councillors should have known there was little chance of a meeting with him when agreeing to travel.

Minister Charlie Flanagan was out of the country on business but they could meet him at any point in Laois.

So what happened? Our politicians decided to back out and not go. Why? Well, because: 'what would be the point of walking up and down outside the Dáil for half an hour'?

A Sinn Féin man said he wouldnot go because it would be 'grandstanding' - well SF men did a lot of that at riots over the years.

Councillors love to complain that they have no power. They give out about the TDs who took their power. They complain about the 'bureaucrats' who control the purse strings. A lot of this is true.

But councillors still have the power of the ballot box behind them.

The people who vote for them gave them the authority to speak up for them on the small but also big issues.

The people of Laois didn't just give them the authority to rant and rave, make idle threats, but do nothing when the heat comes on.

The people didn't just vote for them to spend countless hours fixing potholes and looking for cash for footpaths or public lights.

These are important jobs, but sometimes local politicans have to stand up and be counted for the people on a life and death issue.

Portlaoise hospital is a life and death issue. It is far from perfect and it needs fixing and investment. Some lives have been lost there through negligence but many more lives have been saved through great care.

Laois councillors should have gone to Dublin last week and picketed outside the Dáil.

Who knows, it could have been a quiet news day and they might have got the Save Portlaoise Hospital Campaign into national headlines. Regardless, they have a duty to protest in person where a wrong his being done to the people of Laois.

They are also paid public representatives.

So what if they are ignored, at least they would shown some courage and have stood up for their people and done their job.