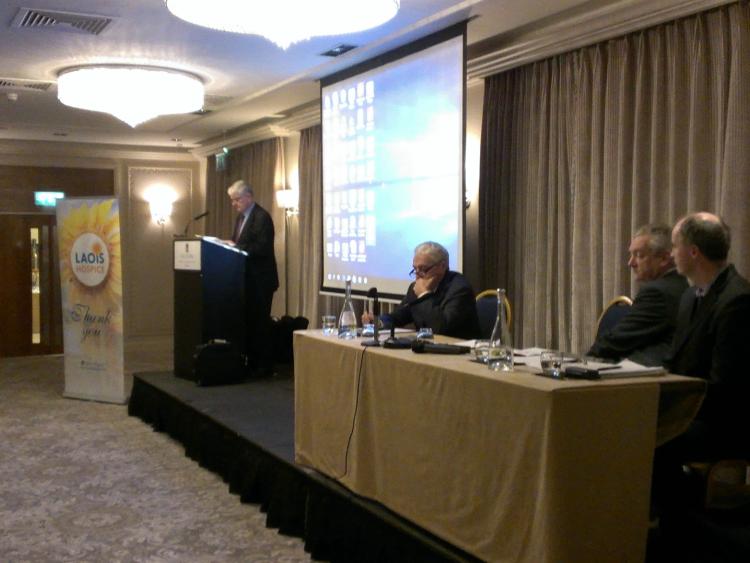 A central hospice unit to serve four midland counties would cost an estimated €9.5 million to build and €2.5 to run each year a public meeting of Laois Hospice has been told.

Pat Bennett, a regional manager with the HSE, revealed the costings to a public meeting of Laois Hospice in Portlaoise where he also called for Laois people to get behind the project.

The unit would serve Laois, Offaly, Longford and Westmeath and would be aimed at helping terminally ill patients where dying at home is not possible. Tullamore is the likely location mainly because of the existence of cancer services in the town's hospital.

However, he told the public meeting in the Killeshin Hotel Portlaoise that, while the Department of Health is committed, "seed money" would have to be raised locally before the Department would get involved. Mr Bennett, a Portlaoise native, said the running costs were €2.5 annually.

However, many supporters of Laois Hospice had a lot of doubts at the meeting held on Friday night, November 18. The number one problem for them was that  Laois people should be the benificaries of any money raised in Laois primarily for the delivery of home care. Supporting a central unit and associated outreach service would, people felt, see funds raised in Laois go to helping other counties who were not as successful at raising funds. They feared services in Laois for people who want to die at home could suffer as a result.

Doubts were also expressed over promises to fund and staff the unit from the Department of Health. Many people doubted that enough funds could be raised in the four counties and there were also fears that it might not be possible to bring the hospice groups together for such a big fundraising drive.

There were also calls for a small unit to be located in Laois either in the town's hospital or as a new wing to the Cuisle Centre.

The leadership of Laois Hospice who spoke at the meeting, Seamus O'Donoghue, Chairman, and its Clinical Director, Peter Naughton, felt homecare must be the priority for Laois Hospice.

Mr Naughton agreed with a central unit for acute cases. He also felt a "two tier" service had emerged in Ireland for people who were dying depending on where they live.

However, the retired surgeon felt any central unit should be only supported after homecare services have been fully funded in Laois. Mr O'Donoghue, suppoted this view and said Laois Hospice would have discussions with Offaly Hospice and the other midland hospices on the HSE's proposal.

A show of hands at the meeting in the Killeshin Hotel, Portlaoise, which was attended by about 150 people, supported the view that paying for homecare in Laois must come first.

Dr Peter Cushen, palliative care consultant for the midlands, urged those at the meeting to back a central unit. He said a small unit in Portlaoise or the other counties was not viable for the type of 'multi-disciplinary' care a hospice unit can provide. He said more people die in hospital in the absence of a hospice than areas of the country that do have a hospice.

Sharon Foley, chief executive of the Irish Hospice Foundation, also backed a central unit. She said senior HSE management had given a firm undertaking directly to the foundation to fund its operation.