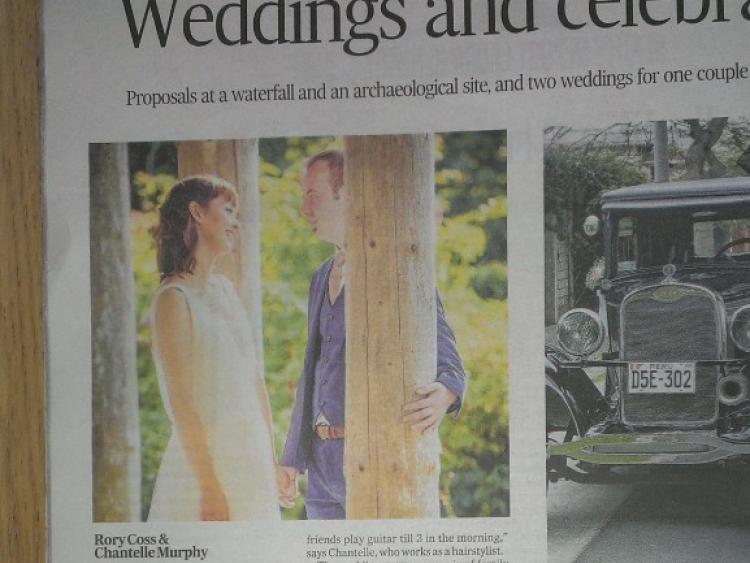 Thousands of people around the country read about the wedding celebration of a Laois couple this weekend.

The popular weddings section in the Irish Times Magazine featured a photograph and article on the nuptials of Portlaoise residents Chantelle Murphy, originally from Mountmellick and Rory Coss, a Portlaoise native.

The paper reported that Rory Coss and Chantelle Murphy met in 2012 in the tattoo shop Rory worked in. They were friends for two years before they finally became a couple.

Rory, who now manages Star Ink Tattoo in Portlaoise, proposed in November 2014 at Glenbarrow waterfall. Joe Conroy on capture it all.

The wedding was on September 14th, 2016, with a ceremony in St Joseph's Parish Church Mountmellick with a reception afterwards in Ballintubbert House.

Trevor Fennell was the DJ on the night and the first dance Jeff Buckley’s Everybody Here Wants You.

“We had a lot of laughs and a few tears during the speeches. Later the staff at Ballintubbert lit two fire pits where we sat on hay bales and listened to Rory and some friends play guitar till 3 in the morning,” Chantelle, who works as a hairstylist at the Blow Dry Parlour, told the Irish Times.

Bridesmaid Danielle made the cake. Chantelle’s aunt Lorna helped with the invitations, candles and mass booklets and her husband Mick who drove the wedding car (on short notice) reported the magazine.

The bride’s colleagues did hair and make-up, while the church singers, Jacinta O Donnell and Geraldine Flanagan, are long-time family friends. The couple’s parents James and Elaine Murphy and Dan and Marie Coss were also very involved.

“I think since we have got married we feel more complete, almost like we are more in love than ever before, which would be hard as we have always been so as one as a couple,” said Chantelle.