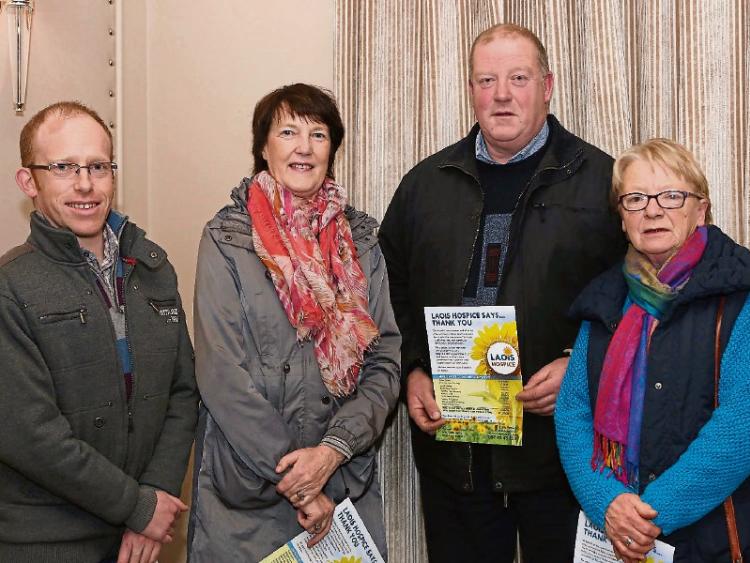 Substantial public concerns were raised over the setting up of a midlands hospicecentre in Tullamore that would be an inpatient unit and act as a hub for the community services for people who are dying.

At the outset of the meeting at the Killeshin Hotel in Portlaoise, Laois Hospice Chairman, Seamus O'Donoghue called for a 'no holes barred' meeting and a frank exchange of views on the future of hospice and palliative care in Laois.

It was clear from the outset, last Friday night, that that the proposed unit was the big issue .

If it goes ahead the unit would be part of a reconfiguration of hospice care involving a range of services that reach out into communities in Laois, Offaly, Longford Westmeath.

However, those who attended had their suspicions.

“It looks like the people of Laois or Offaly or wherever are the ones that are going to have to build the hospice,” said Sheila Bourke of the Clonaslee St Stephen's Day walk.

Her preference was county by county services.

“I dont think the people of Laois would like to see the money going out of the county,” she said.

She suggested a closed six-bedded unit in Portlaoise's hospital could be used as the hospice base for Laois.

Evelyn Dunne doubted wheter the HSE would fulfill its promise.

“Is it possible for us to expect that the HSE will deliver on a hospice, seeing as we don’t know what the future of Portlaoise hospital is?

Ger Whelan of the Laois Vintage Rally fundraiser suggested that a new unit could be built in Portlaoise.

“Why can’t we build a unit through extra rooms onto the Cuisle Centre which would have involved a lot less funding,” he said.

Noelle Graham also of the Vintage Rally also had concerns over money.

“If a unit is to be built in one county you are going to have great difficulty with the other counties, initially anyway, raising funds for another county. That is one of the major blocks,” she said.

He agreed with the idea of having a hospice with specialist services, but he also had doubts over the money.

“What is the minimum that each of the hospice groups have to bring to the table to convince the Department of Health? Is it a tenth a quarter? It is going to be really difficult to get five groups to come together.

“Offaly Hospice has €1.1 million but our accountant says we have to keep at least half of that in reserve because that is what the charities act asks us to do. We’re contributing €200,000 a year. We are contributing the same amount as Laois Hospice to the services and that is about as much as we can fundraise for. I don’t think we could do much more.

“This central hospice hub has huge benefit for a population of 250,000. That is fine but how much money is needed and what are we buying into. We can’t have a situation where you come back and say we need a bit more,” he said.

Rev Peter Tarleton from Ballylinan echoed the views of many when saying homecare should be the priority for Laois people.