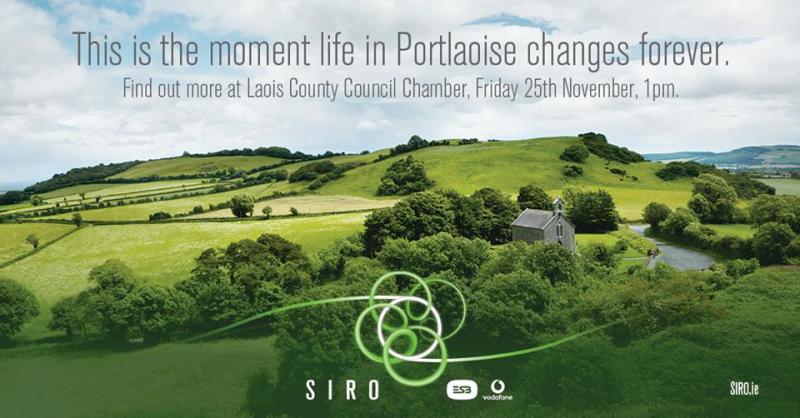 The company that is installing 100% fibre optic broadband in Portlaoise says the town will soon have the same level as access to the internet at Tokyo and much faster than Dublin.

SIRO, the open-access broadband provider is in the process of delivering of what it says is 100% fibre optic broadband network to Portlaoise - in the process adding the Laois town to its 'fibrehood' network of 50 towns as part of a multi million euro project.

SIRO contractors have been working extensively around the town for a number of weeks installing the new underground cable. It is hosting an information day in Portlaoise at Laois County Council this Friday, November 25 to outline its impact the project.

SIRO has previously said  that its optic broadband network is having a "transformative effect" in regional towns where services are live. It claims towns like Tralee and Sligo now have the same level of connectivity as Tokyo and Hong Kong.

SIRO also claims towns are able to attract investment and encourage more people to live and work within their local community. Sean Atkinson, SIRO CEO, gave an insight in to the project at the National Ploughing Championships in September.

“SIRO gives consumers and businesses in regional Ireland access to far better services than that available in Dublin and other cities, thus reversing the digital divide and allowing them to compete more effectively for investment and jobs.

Using the existing ESB network, SIRO is delivered by fibre optic cables all the way to the building. This technology, known as “FTTB”, has no copper connections at any point to slow down the network and delivers 1 Gigabit download and upload speeds.

For example, a high definition film (4GB) takes one hour to download with a 10 Mbps connection – with SIRO it will take 30 seconds. SIRO is offered on an open-access basis to all telecoms retailers in Ireland. Last month SIRO revealed Digiweb will offer services via its 100% fibre-optic Gigabit broadband network, joining Vodafoneas its second retail partner. Discussions with other retail partners are ongoing.

Stats released recently showed that Laois has an average download time of 20mbps. This varies dramatically around the county.