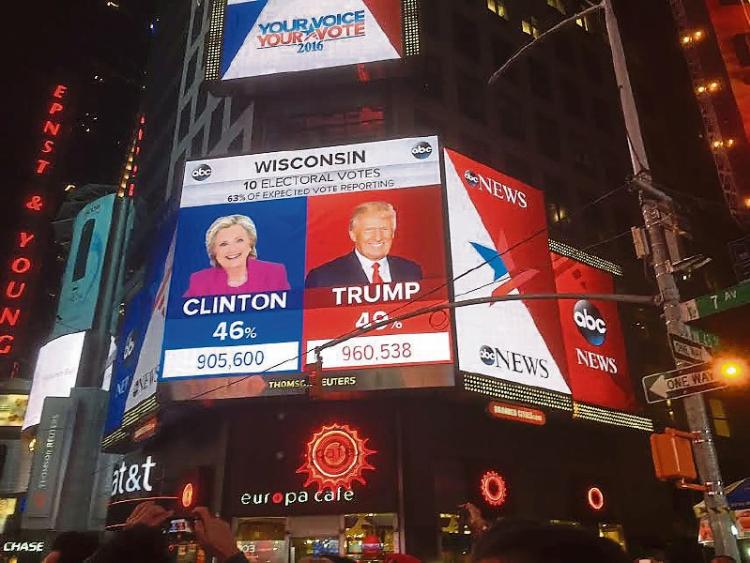 The apparently shrill response to the election of Donald Trump here was something I was not overly sorry I missed, and contrasted, in my own mind at least, with a resilience in New York in the week of the election to what was an unexpected outcome.

New York has never voted for one of its more famous personalities, something which was obvious in Times Square on Election Night, where there was no sense of euphoria as the results trickled in, and a trend became apparent.

Many were convinced, or sought to convince themselves that he could not possibly make it over the line.

When the Florida result came in, there was a muted cheer in one section of the crowd, which could not compete with the almost eerie silence of everyone else.

The feeling that an upset was on the cards was growing increasingly palpable.

Earlier in the day the mood away from the election was the same as any other day, with the usual buoyancy as New Yorkers hustled and bustled in the middle of their busy everyday working lives.

It was a unique Election Day for the city, unique in the sense that the city played host to the two candidates, something that is almost unprecedented on these kind of occasions.

Trump stayed close to his base, at the Hilton Midtown Hotel in Manhattan which, early in the day had an almost understated look about it.

Clinton, meanwhile, took up residence in the Javits Centre in Hell's Kitchen, in an apparent countdown to celebration.

In the immediate run up, the expectation amongst many was that Clinton would win.

Trump Tower, at lunchtime, was noticeable for the cordoning off of the block surrounding it, and the artic lorries parked at the front pavement.

The armed policemen had no problem, however, with letting this crowd of sightseers through, and into the building, where the paraphernalia of the putative President Trump was on display.

For €25, one could avail of the Trump Grill, a three course menu including amongst its choices organic soup, the Trump Grill Burger and fresh fruit sorbet.

Outside, the crowds had started to mass, comprising protestors, sightseers and the mere curious.

Later, at the Hilton the swell of people included many supporters, wearing the trademark red baseball caps, as well as a vocal group decrying the links between money and politics.

Waking up the next day to President-elect Trump, New York seemed to simply get on with it.

Some of the nuances in all of this, were becoming apparent.

A hairdresser in midtown professed her belief in him as been capable and essentially ok.

A Honduran taxi driver, who has lived in the city almost her entire adult life said that she voted for Trump.

Her working life comprised of a seven day week, with four taken up driving, and three in construction.

Her husband also worked in construction and she relied on the support of her mother to look after her young family and specifically her five year old son.The protests in the nights following were muted. Meanwhile, the chaotic Friday evening midtown traffic was ascribed blithely by one bellman to the new President.