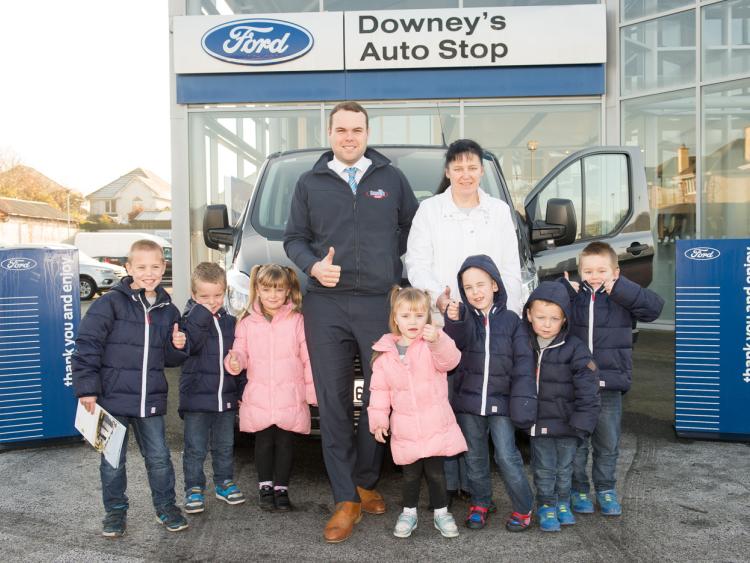 A local fundraising campaign for young mum and widow Michelle Doyle and her seven small children from Portlaoise has come to fruition.

An overwhelmed Michelle thanked the committee, local businesses and the public for their help on Friday November 25, when the family collected their brand new Ford Transit custom 9-seater from Downey's garage.

"It was so touching, the way they all pulled together to do this, I never expected this, they were just not going to stop until they got it for us," she said.

Her old car was too small, so up to now she has been relying on her kind neighbours to drive the children to school. The campaign was begun by local parents, led by Bernie Tynan who runs the preschool attended by twins Ollie and Olivia aged 4.

The community rallied around and launched the fundraising drive for the car in the wake of the sudden death of her late husband Christopher Doyle, who died at the aged of just 37 earlier this year.

"“The outpouring of support was phenomenal. Immediately afterward neighbours appeared with casserole dishes, kind words and offers of support. These same neighbours, upon hearing of our fundraising efforts went on to buy tickets, sell tickets, donate to the bank account and GoFundMe page, this was mirrored right across the town and county," said Bernie.

They raised an astounding €37,088, enough to buy the 9-seater with a discount from Downey's, adapt it for Adam's special needs, and pay car insurance and maintenance for the next six years.

The children patiently posed for photos before excitedly climbing into their new carseats, for their first trip together, up to Dublin to surprise their grandparents, Christopher's parents John and Mary.

"I just love it," said Olivia.