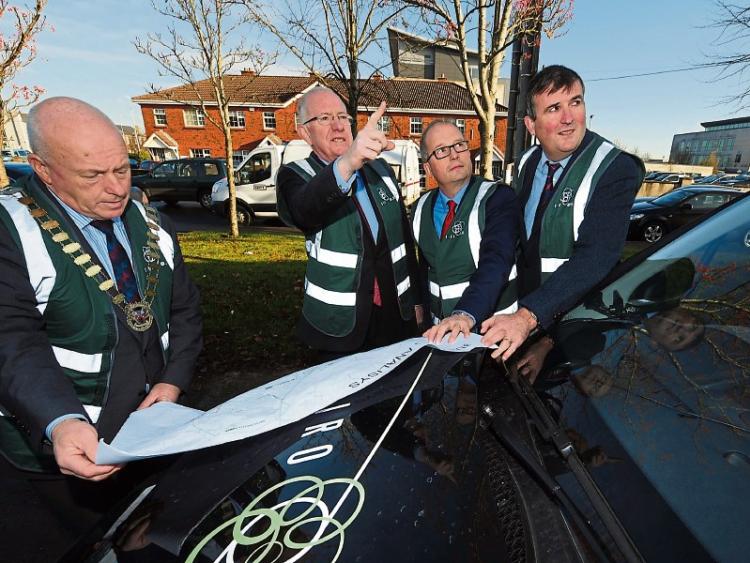 Lightning fast fibre optic broadband is arriving to Portlaoise within months, with hopes that it will do what motorways failed to do and bring new industry.

Siro, a partnership of Vodafone and ESB, is now running the fibre optic connections through the ESB network in Portlaoise, one of the firstof 50 towns in Ireland to get the 1 gigabit per second service.

“We are lighting up Portlaoise on Black Friday,” declared Minister for Foreign Affairs Charlie Flanagan, who officially launched the Portlaoise network in county hall on Friday November 25.

He is certain it will attract new business.

“Portlaoise has grown in my lifetime from 5,000 people to 23,000. Thousands commute from Portlaoise to Dublin daily. I regret that so many people have little choice but to commute. We should bring jobs to people, not people to jobs. I’ve no doubt that this will make Portlaoise more attractive for people to live in and work in, rather than just sleep in, as they will have the flexibility to work from home,” he said.

It could do what motorways couldn't, said Deputy Brian Stanley.

“15 years ago we were told we needed to committ to motorways and leisure facilities to attract companies. That was all done. The recession stalled things but people will be hoping for big business to arrive, and it will help create smaller businesses,” he said.

Starting with Kilminchy in late January, it will spread in from the Dublin road area, and by next November the service will be available to the 9,500 homes and businesses in Portlaoise.

Customers can access the fibre broadband from internet providers, with prices “like for like” with current costs, said Siro CEO, Sean Atkinson, who compares it to rural electrification.

Siro is also bidding for the government's Rural Broadband Scheme, that aims to connect a lower speed broadband to every rural home in Ireland in the next five years.

Minister Flanagan said that no area will be left out.

“Lke the Carlsberg ad of old, it will reach the parts of Laois that others haven’t been able to reach,” he said.

“This is more than just broadband, this is a vote of confidence in regional towns, and how they can contribute to the Irish economy. It comes at the right time for us, as we are looking at how Portlaoise can turn its back on an era or decline, capitalising on areas like the night time economy, the digital economy, and tourism,” he said.

Despite publicity, the Siro launch was not attended by any Portlaoise businesses.

“We think it’s because it is on Black Friday, hopefully they are too busy making money,” said one official.