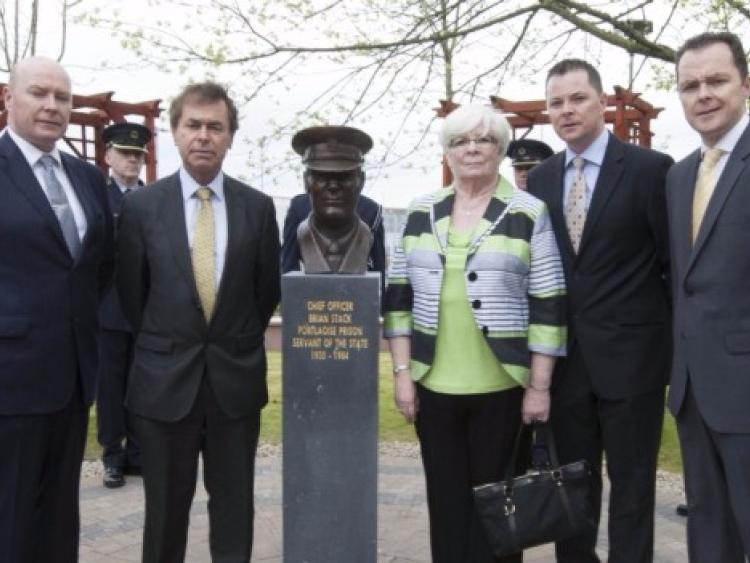 Sheila Stack wife of the late Chief Officer Brian Stack and sons with the bronze bust unveiled at the Prison Service College, Portlaoise by Minister for Justice Alan Shatter TD,

Sinn Féin’s leader Gerry Adams remains adamant that information on the killing of Portlaoise prison officer Brian Stack was given to him be the dead man’s son.

Austin Stack insisted last week that he did not give names of possible suspects to Deputy Adams. Last week it emerged that the names of four people including, three serving SF politicians had been sent to the Gardaí by Dep Adams in relation to the death of Brian Stack in 1983.

Dep Adams spoke to reporters about the issue on Saturday.

"Why would I suggest for one second that Austin Stack gave me names if he didn't give me names? How could Austin Stack expect me to try and get people to meet with him if he didn't tell me who he wanted to meet. Come on. I didn't name suspects. I never said anybody was a suspect," said.

The Sinn Féin leader said he was given the names of four people by Austin Stack in 2013. At the time, the Louth TD arranged for Austin and his brother Oliver to meet the Provisional IRA figures about their father's death.

"That engagement with the Stack family culminated in a meeting with the former IRA leader who had undertaken an investigation of sorts. The Stack brothers made it clear to me they wanted an acknowledgement if republicans were involved and they wanted closure.

"At the end of that process they got that acknowledgement and in their own words they got closure of sorts and they thanked me," he said.

Mr Adams said he did not send the names to gardaí earlier because it was not an issue. He said Laois TD and Minister for Foreign Affairs Charlie Flanagan accused him of having details on the murder during this year's general election campaign.

Last week Austin Stack released two statements in which he refuted the claim that he had given names to the SF leader. The second was released following an interview given by the SF leader on local radio. In it Mr Stack said the Republican was making matters worse for the family.

“I wish to very clearly put on record that I never gave Gerry Adams the any names of individuals in relation to my father’s murder. I also want to put it on record that at our meeting with the IRA leader we did not receive an apology as suggested twice by Deputy Adams, they expressed regret for their actions which is a completely different thing.

“Deputy Adams claims that when I gave him the names he then passed them on to the Garda Commissioner, this is also clearly untrue as my only meetings with Gerry Adams were in May, June, July & August 2013 and not during the election campaign of 2016 when the e-mail in question was sent

“If Deputy Adams is to be believed then the obvious question is why it took him three years to pass on the information,” he said.

Mr Stack said that the only contact that he ever had with Gerry Adams was an email to arrange the first meeting and then a series of meetings between May and August 2013.

Mr Stack concluded: “In his botched attempt to clarify matters Gerry Adams has only caused more confusion by clearly telling untruths. By continuing to be untruthful he has compounded the pain and suffering of my family”. All I am asking for is that Deputy Adams be man enough to finally come clean and tell the truth in this matter”.

Brian Stack was shot near the National Stadium in 1983 on his way to a boxing tournament. He died some months later as a result of the injuries suffered.