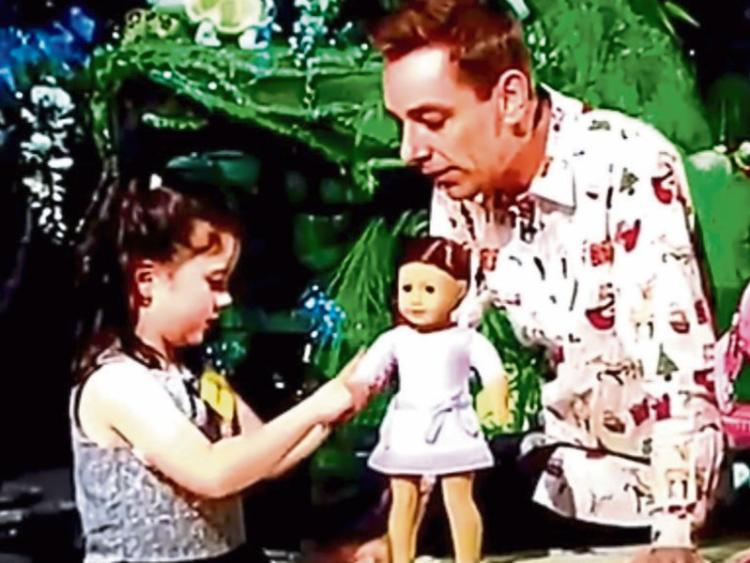 Little Bebhinn O'Connell from just outside Abbeyleix did her family and community proud after she gave a winning toy demonstration on the Late Late Toy Show.

Bebhinn aged 5, showed Ryan Tubridy how her 'Libre' diabetes gadget helps her check her own blood sugars, just like the little kit she uses on her doll.

Her mam Cliona, dad Alan and big sister Aoife,7 watched backstage as Bebhinn chatted confidently with Ryan, facepalming her forehead in exasperation at his mistakes, and winning the hearts of over 1.5 million Irish people watching the show last Friday December 2.

“That's not how you do it,” little Bebhinn told Ryan as he botched up a game.

Videos of her stint have been viewed over a quarter of a million times, with interest from other parents of diabetic children on the doll's toy diabetes kit.

Her mother had expected Bebhinn to hold her own, speaking to the Leinster Express the day before they went up to the RTE studios.

"She's well able to talk, she'll be pointing out if he is wrong about anything, she won't let him away with anything. A whole heap of toys was sent to our home, we are not allowed to divulge anything, but she is trying to make sure she knows where everything is and what everything does," she said.

The sisters were "shellshocked" after being chosen from thousands of videos sent in by children all around Ireland.

"We saw the ad to send a video so we did up two little videos. Bebhinn talked about her dolly who has a diabetes kit too. Aoife is quite happy to do anything, but especially loves books," said Cliona.

They sent the videos last September, and got a call before Halloween to come to RTE over mid term.

"The two went in and spent some time talking, we have no idea what they did, and they did some filming. Two and a half weeks ago we got a call to say they had been successful. We waiting until they were both home from school to tell them, and all hell broke loose, there was absolute bedlam. I can't believe they are both on it," said their delighted mother before the show.

The girls had already met Ryan at the audition day and gave the Leinster Express their first impressions.

Both attend Abbeyleix South School. "The kids can't believe they're going to be on television," said Cliona.

See Diabetes Ireland for details on where the doll's kit can be purchased.