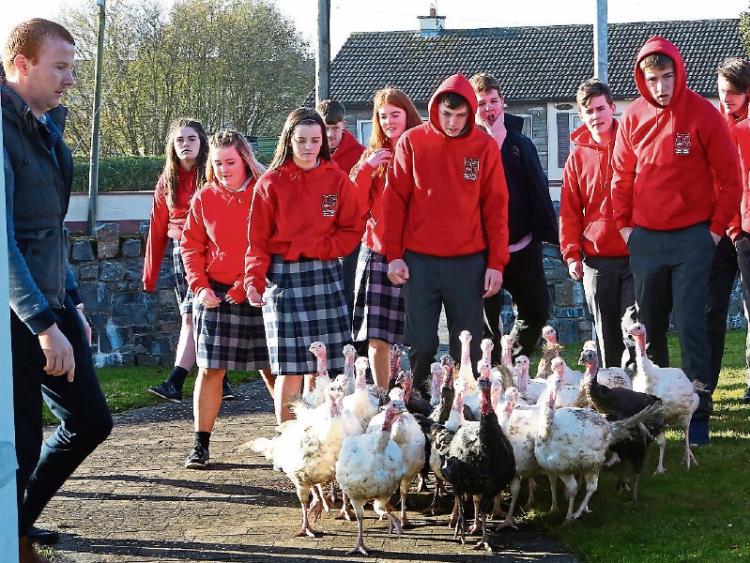 It was decided as part of Colaiste Iosagain’s Transition Year mini company that they would invest their skills as entrepreneurs into Ireland’s agricultural industry.

The company consisting of twenty- four students led by teacher and veteran farmer Conor Mitchell, settled on that they would hit the Christmas market and rear turkeys.

Later they would ‘moo-ve’ towards rearing of cattle in joint with the L.C.A program in the school.

Twenty- two white turkeys were purchased from Martin’s Poultry, Co. Galway, with twenty of them to be auctioned alive by the great Noel Dunne from the Farmer’s Journal.

However, two other turkeys were being reared as payment towards Tom King and Fintan O’ Donnell as they ‘gracefully’ built a shed for the livestock.

It has been noticed that Mr. O’ Donnell has been also rearing his own turkeys in competition to our own.

The next port of call was to sort out who was to rear the turkeys.

A rota was assembled to decide who would do certain tasks, leaving certain students to do a daily trek to the dwelling place of the ‘things’ as some students described.

Amidst of all the squealing and squirming , the turkeys were given the best of care and were herded around the school grounds leaving them in fine shape, student Patrick Hurley commented ‘Ah sure they’re so fat we may kill them now’.

The Transition Years showed a great aptitude for business as they have set up a share system giving approximately €40, hoping to raise a profit receiving more money.

Lately the company has set their eyes upon the cattle segment of their empire.

A trip was made to the Tullamore Mart as they purchased a Simmental Heifer which is due to give birth on the 1st of March to a five star Pure-bred Limousine bull, this beauty was a steal at €1,480!

Also the T.Y’s and L.C.A’s all issued shares and received credit off the mart to allow the company to gather more shares, another smart business move by the company’s Financing Department.

Finally the Company made a trip to the people of Oakdale, an Olds Folks Home beside the school and showcased their goods to the residents and staff.

The Director of Nursing at Oakdale, Avril Finnerty said , “’The residents were delighted when local teacher Conor Mitchell arrived with 28 students driving 28 turkeys along the footpath.

“They even brought a few of the turkeys into the Nursing Home to residents who were unable to go outside to see the spectical.

“ Great credit is due to the entire TY class as they brought great happiness and laughter to our residents.

“During our recent Hiqa inspection the Inspector praised the fact that we encouraged and facilitated people to bring in pets and animals to our Nursing Home.”

The head of the TY class Conor Mitchell said,

“The students were amazed and could not believe the bond that existed between the older people and the turkeys.

“The class also have an incalf heifer as part of the mini company and she is also due to pay a visit to Oakdale over the Christmas.”

An escort was made with twenty turkeys only as it was reported that two of them, Tom and Fintans’ Turkeys were fighting and were left bruised in battle.

The visit was a great success and fun and photos were taken with a resident donkey that was also at the scene to enhance the enjoyment of others.

The “Grand Live Turkey Auction” will take place on Thursday, December 15 at 6.30pm.

Profits are being donated to the local Saint Vincent De Paul organisation and the Portarlington Christmas Lights organisation.

On the night other mini companies will be attending showcasing their own projects and support would be appreciated.