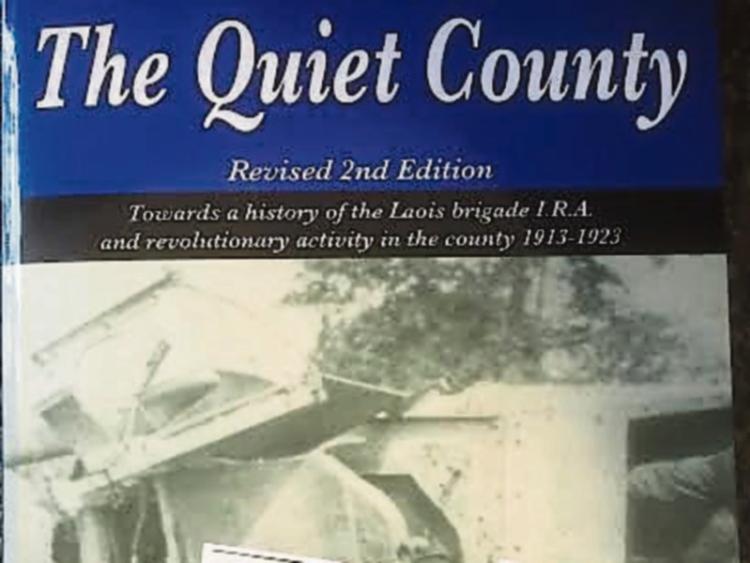 Michael Rafter has published the revised second edition of his book “The Quiet County” - Towards a history of the Laois brigade IRA and revolutionary activity in the county 1913-1923.

The book will be launched by Comdt. Stephen MacEoin of the Military Archives at Heritage House, Abbeyleix on Tuesday, December 13 at 8pm.

The book has been a labour of love for Michael who published the first edition in 2005.

As he says himself in his introduction, the book is “an attempt to record County Laois's part in the conflict that would lead ultimately to the creation of the State in which we now live.”

His interest initially centred on his grandfather Michael Rafter who, in the 1940s, was awarded the War of Independence service medal.

Michael's grandfather died before he was born, but he embarked on researching his involvement and found records at the Veterans Administration section at the Department of Defence at Renmore in Galway.

Michael decided to concentrate on his grandfather's old IRA unit and was fortunate to find records of it in existence.

It was from these and written accounts given by Lar Cummins, Edward Fitzpatrick and his grandfather that much of the framework of the story was taken.

“I consider this book to be a work in progress and hope that it will spark a renewed interest in the history of the conflict in our county,” writes Michael.

The second edition was prompted by additional information that came to light in the wake of the initial publication in 2005.

At the launch of the first edition he received photographs from the family of Brigadier Mick Gray O/C Laois brigade during the War of Independence and O/C of the Free State Army in the county during the Truce and early civil war.

The family gave Michael a copy of Mick Gray's notes that were found in the family home after he passed away.

“Reading Mick Gray's notes was like stepping back in time and seeing the events through his eyes.

“His account of events surrounding the army split in Laois just before the Civil War added hugely to my understanding of just what was happening as the country struggled to assert its independence.”

The second edition has new chapters relating to the battle of Abbeyleix and the Tunduff ambush.

The quantity and quality of photographs, letters and documents gathered from so many sources eventually led to the fully revised 2nd edition.

“This book is a tribute to the work of the Volunteers of the county during the revolutionary years at the beginning of the 20th century,” writes Michael.

“Spare a thought or prayer for all of those men and women who were prepared to lay down their lives for the freedom of the country, all whom are now no longer with us.

“Let us hope that the modern state of Ireland in some way reflects the ideals for which they fought.”