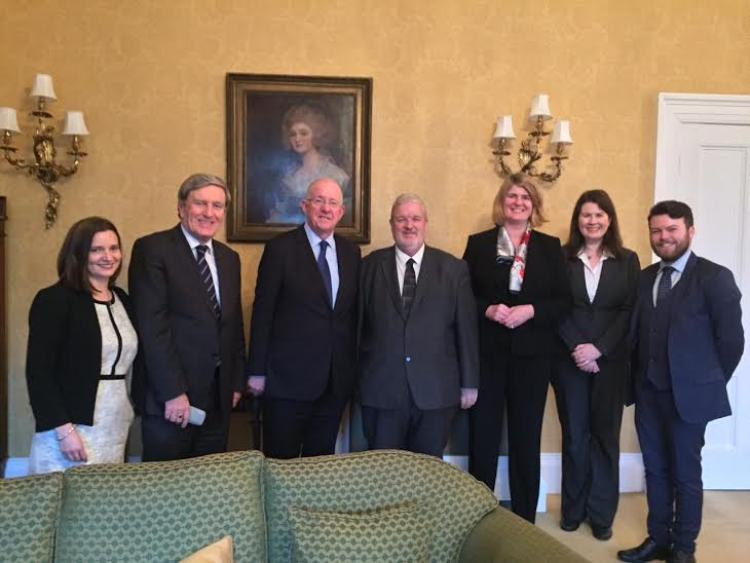 Brexit toplined a visit to London today, by the Minister for Foreign Affairs and Trade, Charlie Flanagan.

His political meetings included engagements with Hilary Benn MP, Chair of the Parliamentary Committee for Exiting the EU; with Labour Shadow SoS for NI, Dave Anderson and with the All-Party Parliamentary Group on the Irish in Britain.

"I was delighted to have an opportunity for discussions on Brexit with parliamentarians from a range of different parties today in Westminster. I explained the approach and views of the Irish government and learned more about the work underway at party level and in Westminster," said Minister Flanagan.

"I also had a good discussion with Dave Anderson MP on developments in Northern Ireland. I affirmed the Irish Government's strong commitment to the full implementation of the Stormont House and Fresh Start Agreements, including the crucial issue of establishing the institutions for dealing with the legacy of the past. I reiterated our dedication to protecting the provisions of the Good Friday Agreement, to maintaining an invisible border and to protecting our island economy in the context of Brexit."

The Minister began the day by meeting with a group of UK based members of Ireland's Global Irish Network. "The Irish government deeply appreciates the commitment to the Irish community abroad of our Global Irish Network around the world. This morning I was pleased to hear first-hand the perspectives of some our most successful diaspora on the challenges and opportunities of Brexit."

Minister Flanagan also addressed a gathering of those involved in Ireland's successful 2016 centenary commemoration at the Irish Embassy. He stated: "The centenary of the Rising gave us the opportunity to showcase the rich culture and diverse history of our island.

"Our team in London, under the leadership of Ambassador Mulhall, delivered a strong programme which reflected both the Irish experience of the First World War and the Easter Rising and helped to deepen understanding of our history in the UK. I am delighted that hundreds of thousands of people in the UK engaged in the wide programme of official centenary events during this very important anniversary year for Ireland."