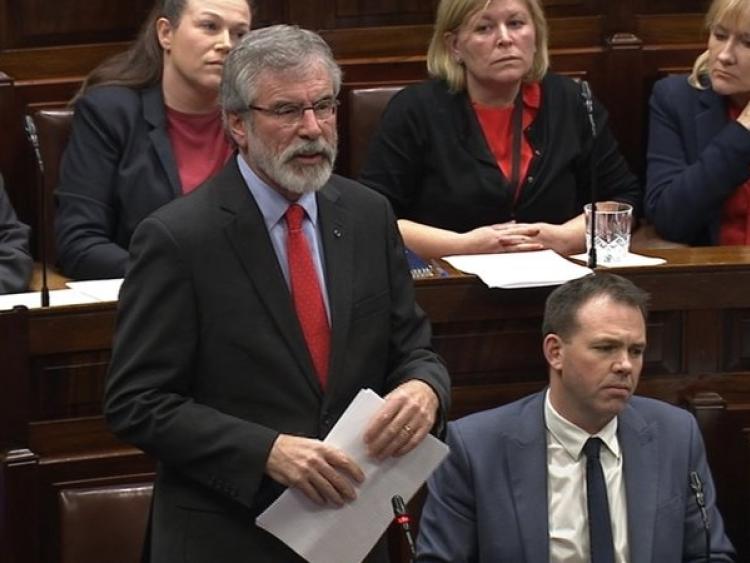 The family of murdered Portlaiose prison officer Brian Stack have rejected a Dáil statement from Gerry Adams on his killing in 2013 and recent developments relating to the issue.

In his statement Gerry Adams said the shooting of prison officer Brian Stack in March 1983 was "wrong, a grievous loss for his family, and should not have happened". The Louth TD said he had sought to help the Stack family however he also questioned Brian Stack's son Austin over the provision of names.

He challenged the Taoiseach Enda Kenny and Micheál Martin and over identifying many IRA members who had been involved with many aspects of the peace process if they wanted names of those in the IRA who knew more about the killing of Brian Stack.

Speaking to reporters outside the Dáil, Austin Stack said his initial reaction was that the Dáil chamber had been "debased" in the grossest terms by Mr Adams.

Mr Stack also said Mr Adams made allegations that he gave him names of individuals which he insisted that he did not.

He said they told Mr Adams after the speech exactly what they had thought of what he had said.

In his statement Dep Adams said he met the Austin and Oliver Stack on a number of occasions. He said minutes were taken at one of these meetings.

He said Mr Stack's sons Austin and Oliver were given a statement, acknowledging "the IRA was responsible". He said that it had not been authorised and the person had been disciplined.

He said they acknowledged the process and issued a statement thanking him for facilitating the outcome.

Mr Adams said that in 2013 Austin Stack gave him four names who he believed had information on the case, which he had been given by gardaí and journalist sources.

"Now Austin denies giving me these names. Why on earth would I say I received the names from him if I didn't?" Mr Adams asked.

The Sinn Fein Leader said that during the recent election campaign the Fianna Fáil leader and others repeated a lot of what was said in 2013 - he said it was part of an election strategy against Sinn Féin.

He said additional allegations were made about withholding information from gardaí.

Mr Adams said that to remove any uncertainty or ambiguity he e-mailed the Garda Commissioner the names Austin Stack had given him.

"I never at any time described those named as 'suspects'", Mr Adams told the Dáil. "I made it clear I had no information on the death of Brian Stack".

He added that the e-mail was only sent after he had spoken to three of the four and he added that there is a live garda investigation with which he is willing to co-operate.

He said today's statement in the Dáil was following an e-mail he wrote to the Garda Commissioner, being put "inappropriately" in the public domain and raised in the Dáil twice by Mr Martin.

Mr Adams noted the word "inappropriately" due to the live investigation into the murder of Brian Stack.

He accused Mr Martin and Taoiseach Enda Kenny of being unconcerned over prejudicing the trial or any future trial in relation to the matter.

He denied Mr Martin's claims that he described the names as "suspects", that he took a note of the meeting with Austin Stack and that he took Austin and Oliver Stack to the meeting in a blacked-out van.

He told the Dáil that he travelled with the Stack brothers in his own car to a "pre-arranged place at the border" where they were taken in a van to a meeting in Northern Ireland..

Fine Gael TD Alan Farrell intervened and said it was appropriate that two other individuals whose names were in the public domain - Sinn Féin TDs Dessie Ellis and Martin Ferris -should be given the opportunity to address the House.

Dep Ellis said he was in jail in Portlaoise Prison, and before that was in America. Dep Ferris said he met gardaí in 2013 about the death of Mr Stack. He said he co-operated fully and had nothing to answer. He said it was a disgrace that he had been named in the Dáil.

"I refute any allegations. For the information, the man in question (Dep Farrell) claims to be a solicitor, I was actually in jail for the period. In Portlaoise and before that in America so you should check your facts," he siad.