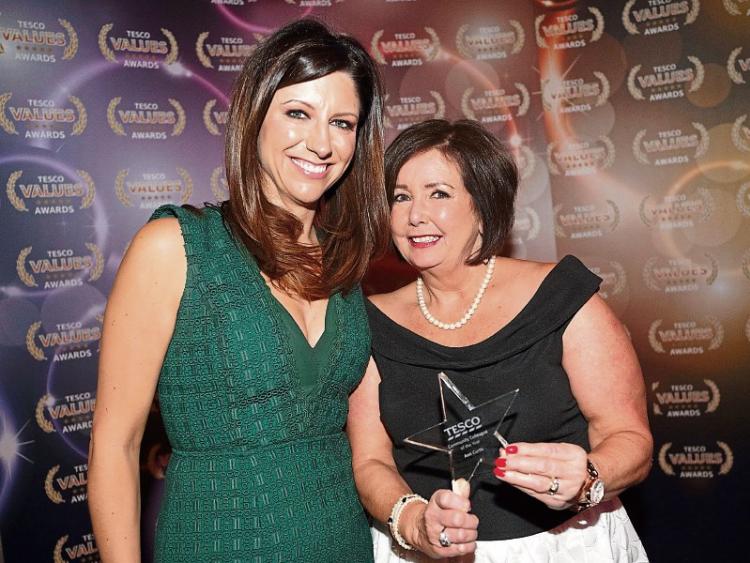 For her “endless enthusiasm and infectious energy”, Ann Curtis, Tesco Community Champion in Portlaoise, has won the ‘Community Colleague of the Year’ award.

Ann, a Dubliner now firmly settled in Ballybrittas, took up the role of community champion shortly after she started working at the Portlaoise store in 2011.

“My husband had passed away and this job was like a lifeline, he must have been looking after me,” she said.

She runs the store's community award initiative, the familiar blue tokens used by customers to vote for their chosen charity.

Every eight weeks the store divides €1,000 between three local good causes, based on how many votes they get.

She has the hard job of whittling down thousands of applications that come in.

The feel good factor is great she said.

“It is a wonderful job to be in, I have develped a wonderful bond with the Kolbe special school, and I have got to know so many football teams, clubs and schools.

“We just presented money to Brigid's hospital in Shaen, I know it's not an awful lot butit helps their Christmas party. Ballyfin Ladies football club also collected a cheque and they bought bars of chocolate to hand out to the checkout girls, it's just a lovely thing,” she said.

She was particularly touched when she met Nicolette Connolly, mum to Ben and the late Jake Connolly, in whose names a trust is working to build a home in Mountmellick for children with life limiting conditions.

“They were one of the first beneficiaries, they broke my heart,” said Ann.

More recently, widow Michelle Doyle from Portlaoise with her seven little children visited the store to accept a donation, touching Ann's heart as well as all the staff.

Ann is now the area champion for eight stores across the midlands, covering as far as Ballinasloe.

She also oversees fundraising for the Tesco charity of the year, this year Temple Street children's hospital.

“In Portlaoise alone we raised €30,000. Last Saturday we sold magic reindeer food and had Santa for the kids, and it raised €3,150, that's a phenomenal amount, people are so generous,” Ann said.

She also oversees the distribution of leftover food from the supermarket, through the app Foodcloud.

“There are five or six local charities registered with us. Every day we post what food is left over on our app, and they collect it. We have donated thousands of meals, we don't throw out any waste, people don't realise that,” she said.

She was “chuffed just to be nominated” for the award.

Her two sons were unable to attend with her, but they let her know how proud they were with flowers, while her workmate Bernie Keane went along for support to the ceremony in the Hilton Hotel on November 10.

“I never expected to win, I was over the moon,” she said.

Application forms for the community fund are available in store and online.